It’s not that Sunday was one of my best ever days, but it was certainly my best race day so far this season.

My lead in to the Hampshire 100 was not ideal, but considering the damage I did to myself in my Wildcat 50 crash I felt pretty good and recovered enough to be optimistic for a reasonable finish.  It’s not that I need to be 100% on to finish a marathon, but it’s hard to have a strong ride without being in top condition.  Fortunately conditions were dry and overall quite suitable.

Carrie did the ‘cross race on Saturday and finished 5th out of 11 women- pretty good considering everyone ahead of her races in the Elite category.  She was able to put her newly-honed ‘Cross Camp skills to work and rode a pretty consistent pace with steady lap times even though she spent most of the day riding by herself. 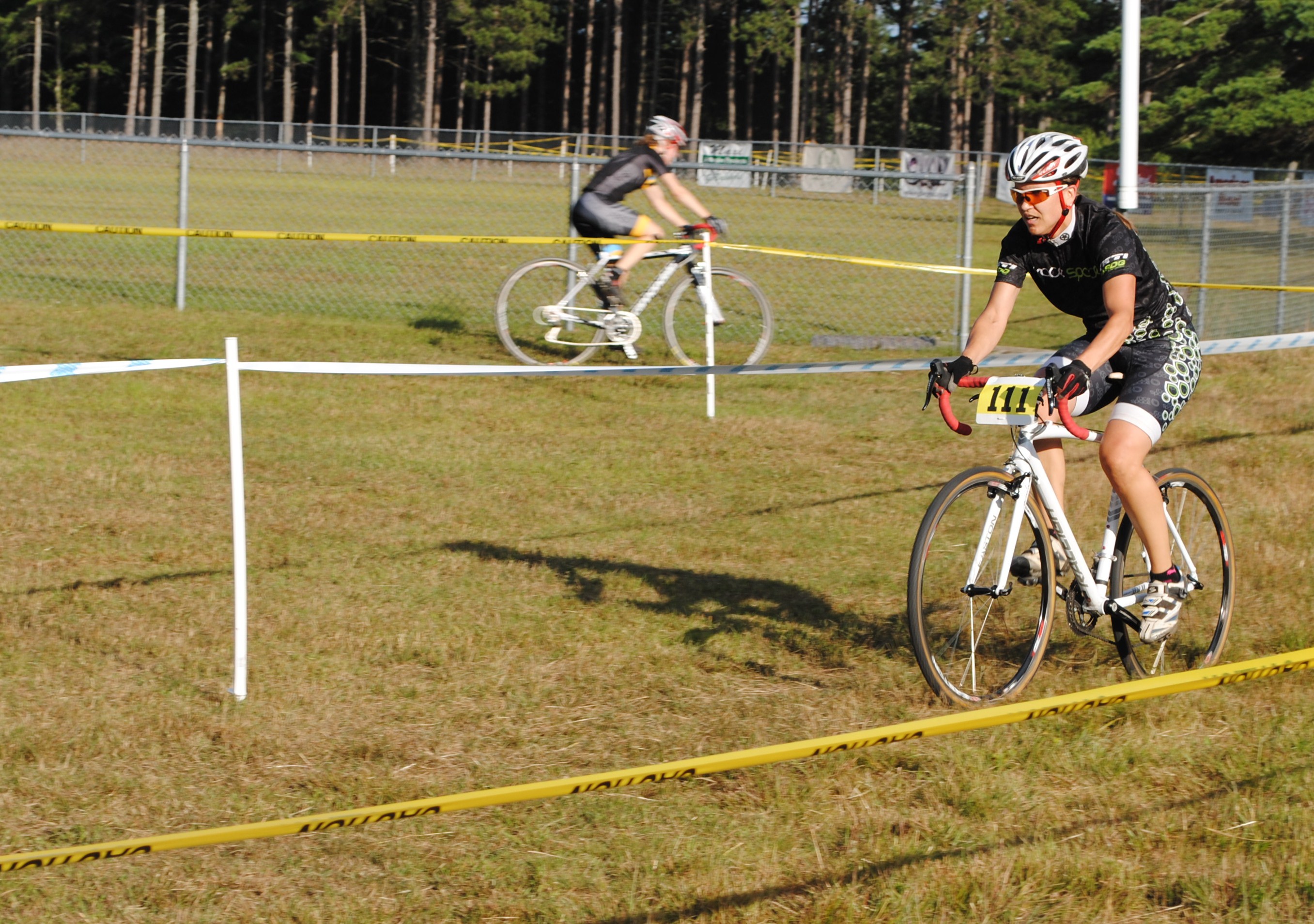 As she wound down the clock I contemplated entering the short track race that immediately followed.  Part of me really wanted to, but I knew deep down that I was going to need to save as many matches as possible for the last 1/3 of Sunday’s main event.  I weighed the opportunity to fly the Moots flag in another event and count the effort as a warm up but ultimately decided to stick to the plan of short, mellow ride to open the legs a bit without getting tired.

With my warmup complete and a cursory washcloth shower we headed over for dinner.  We had picked up a 6 pack on the way down and quietly sipped on some lukewarm Shock Tops while we ate our pasta and meatballs.  After the sun went down I had nothing more to do so I got ready for bed at the uncharacteristically early hour of 8:45 PM.

Morning came early and I calmly got ready for the event.  I was neither nervous nor excited, which was strange- I just felt very present and aware of what was going on.  Sunscreen, bug repellent, triple antibioitic ointment, Red Bull and Clif Bars were applied, ingested or both.  After a quick warm up I headed over to the start and got positioned- and for the first time Carrie was there to see me off (I’m on the far right of the frame wearing a white helmet with my head down). 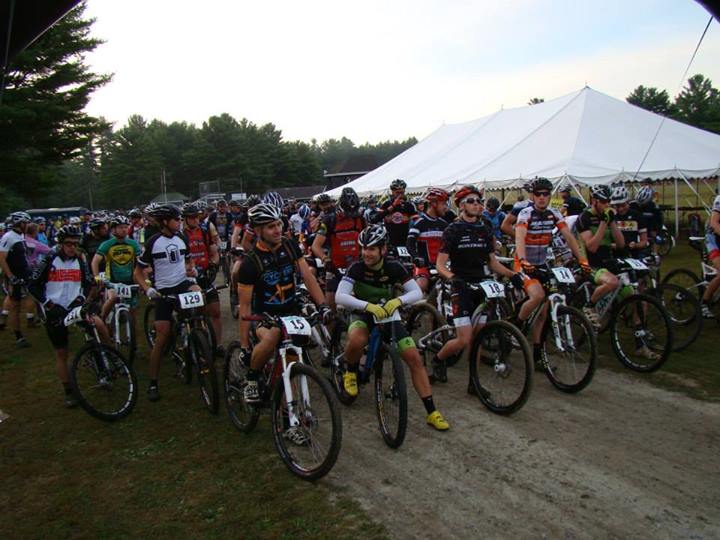 The gun went off and we made our way around the track and out- or at least some of us did and went the full way around the start loop while others took the short cut and dropped about a quarter mile off their race by cutting through the singletrack we’d used in years past (I found out later that those that cut were relegated, but it didn’t end up helping my position).

After the reshuffling of the start and two forced dismounts over railroad bridges we got into the usual rhythm on the fast, open pedaling sections that make up the first third of the race.  I felt good- not great, but good, and slowly settled into endurance race pace and tucked into a group to share the work.   The first 20+ miles are fast with average speeds you’d expect to see on a road bike so it’s critical to not dig too deep early.

We skipped through the serpentine single track at Crotched Mountain which was a lot of fun and started to separate the mountain bikers from the roadies.  And before you ask I railed all of it and picked off a few riders who’d barreled past me on the gravel road.

A few more gravel road sections then we started to make our way through the deep sand of “The Beach” section, then up the steep, bouldery Hedgehog climb which I rode clean from bottom to top.  After a quick descent we were on to the Powerline climb, and while I rode more than all of the riders around me I walked when it got really, really steep.

After those two climbs the race gets into what makes it so grueling- frequent climbs on singletrack, disused jeep roads and fire roads then scree bombing down the loose, rocky descents that are high speed and super chattery.  On all of the fast, wide open descents and tight, square-edged singletrack the MX Divide was awesome.  No matter what the course threw at it the bike was unflappably stable, smooth and composed. 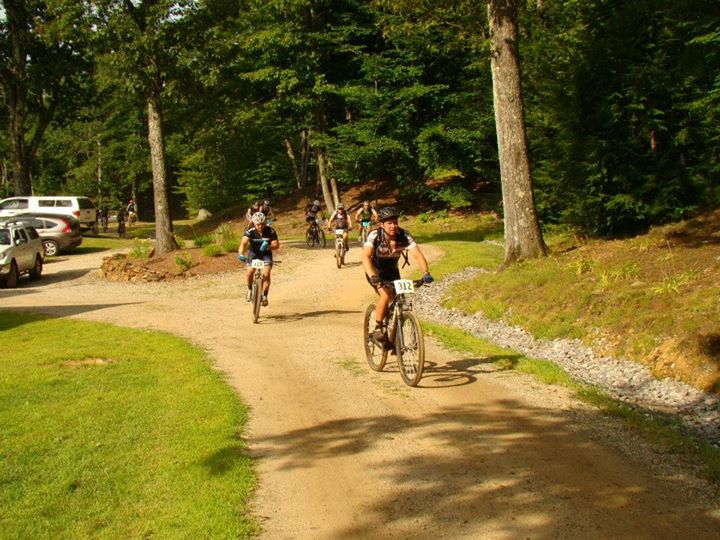 Through mile 50 I was cruising and riding strong, but the last portion of this race is always a killer.  The section from mile 50 to the finish is soul crushing with frequent climbs and adds to the relentless feel of the course.  It’s where many people crack, and while I wouldn’t say that happened to me I definitely slowed down and started to feel the weight of fatigue settling into my legs.

My string of race DNFs has meant that I haven’t raced more than 4 hours this year and although I’ve had a handful of long road rides I just don’t have that deep, burned in, late-stage endurance you can only get from pushing it at race pace.  On a good day I can cut past guys during this section, and while I wasn’t carving people up like I wanted I was maintaining my position and even picking off a few stragglers.

The finish of the race has changed over the years and this year, like last year, spent a seemingly endless amount of time on the singletrack right before the finish line.  The trail is in good shape overall, but the sharpness and frequent steep climbs past mile 60 are murderous.

My goal was to finish in 6:45 and match my 2011 time, with a low end ideal day target of 6:30 and a high end of 7:00.  On a different, slower course with two forced dismounts I rode a 6:50- and was pretty happy with that even though I lost the drag race to the line with some old school roadie dude in another age group.  Bastard sucked my wheel all day and got around me to win by 6″ because I thought the finish line was 50′ closer.  There’s always next year.

Carrie was happy to see me and although her photographic efforts were relatively fruitless having her moral support was welcomed.  As I laid on the ground whining about how tired I was she packed the car and got us ready to leave.

So with great support and low drama I was able to finish my fifth consecutive Hampshire 100 making me one of 12 Hampshire Hardcores who’ve achieved the feat. 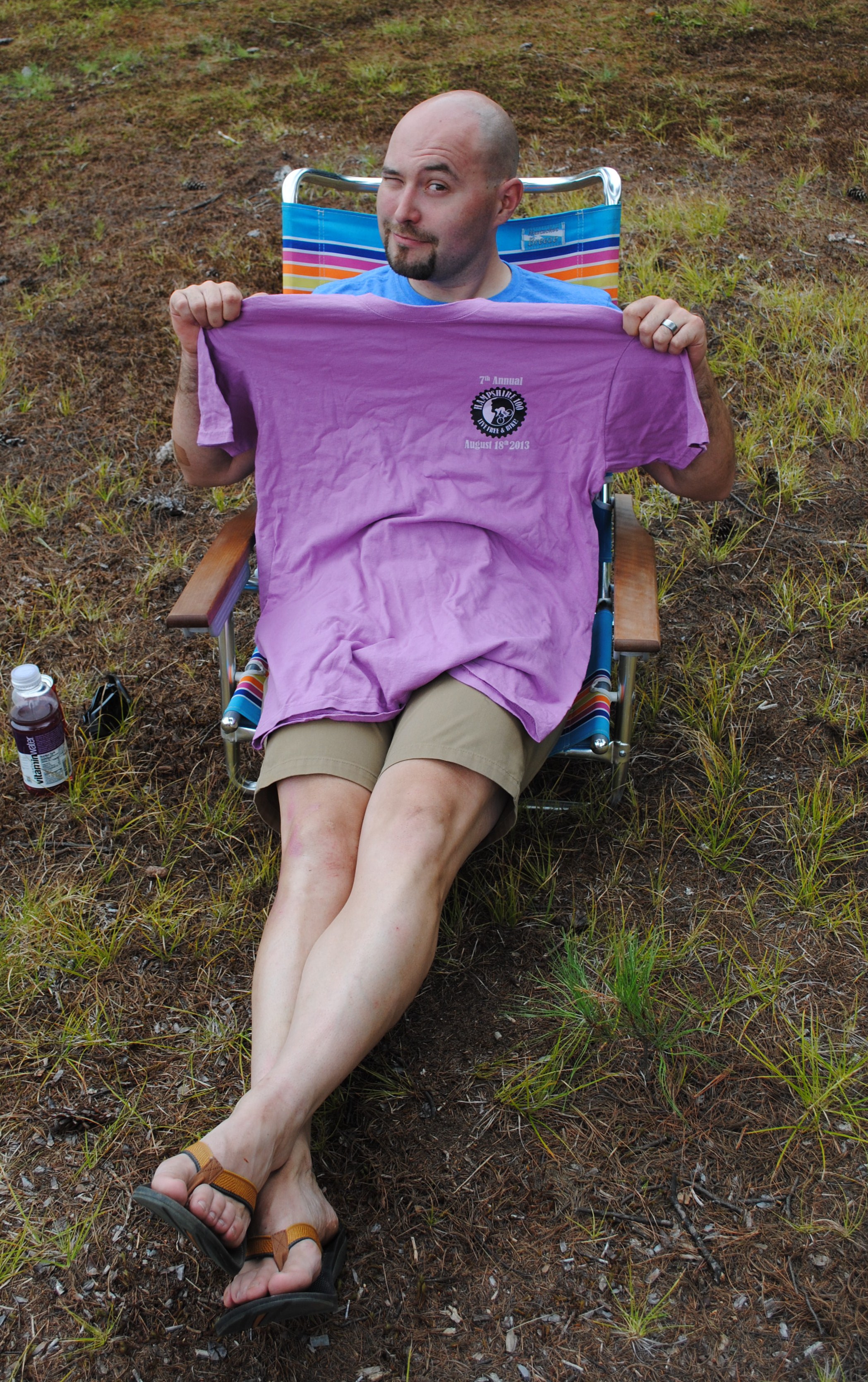