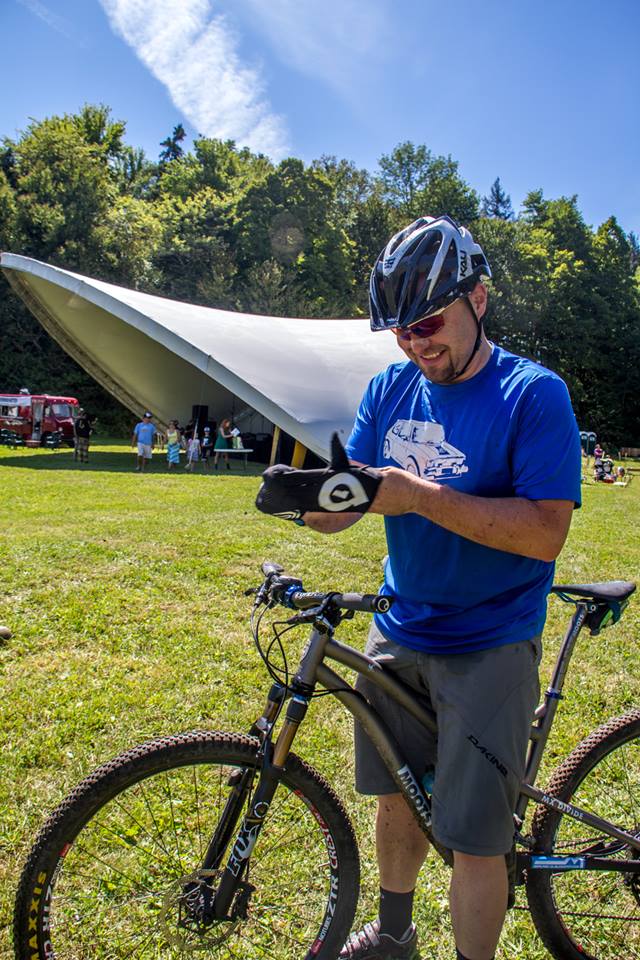 Enduro is so hot right now.

So hot in fact that there were two Enduro events in Vermont the same weekend.  The Eastern States Championships were at Killington and all of the regional legit enduro competitors contested that.  Not being a legit enduro competitor I opted for the smaller and more grassroots Wicked Witch of the East in Waitsfield.  Small, locally run events are definitely my preference so even though it was only six days after the Hampshire 100 I decided to give it a whack.

Some riders can bounce back from a 7+ hour race in a few days, but from my experience an effort that long usually takes me a week to a week and a half to get back to full strength.  Knowing that I signed up for the Wicked Witch with the goal of helping a cool event get off the ground and that I’d be going into it with my “ride face” rather than “race face.”

The morning of the event I rolled out of bed, packed up my gear and headed down Route 100 to Waitsfield.  I was struck by how similar this particular feeling was to college- bike in the trunk, Led Zeppelin blasting on the stereo with the windows rolled down as I headed south to a race.  I smiled as I thought how much things had changed since then- a house, a wife and a real job later, but my priorities that were still pretty much the same.  On a sunny summer day in Vermont there’s nothing I’d rather be doing.

It turns out that there was actually some competition at the Wicked Witch and guys showed up prepared.  I was running the shortest travel and was the only one without a dropper post.  Some even had pads.  And I didn’t get the opportunity for a pre-ride beyond a quick spin a couple hundred yards into the woods.

The gun went off and we quickly filed into the woods.  I was rolling along at a reasonable pace and quickly settled into second place.  As I sat in behind the leader we quickly gapped the rest of the field and wound our way up the serpentine climbs.  I felt good and was comfortable at race pace but knew I had to settle down with the amount of climbing that lay ahead.

We kept rolling, and my heart rate stayed pinned.  Around 25 minutes in my gap went to about thirty seconds and then cracked completely after trying to clean one of the tough uphill crux sections.  I had to get off and walk as all of the fatigue from the week before came rushing back.  My fitness is reasonably good this time of year and I’ve got both solid anaerobic power output and long distance aerobic power output, but there’s a gap in the high level aerobic area between those two (sounds crazy, but there are actually a few high profile riders with similar really short and really long skills that struggle at middle distance- Ralph Naf, Jeremiah Bishop and Amanda Carey among others).  And yes, this distance fell squarely in the trough where I’m less than awesome while still being fucking tired from the Hampshire 100.

So after that I tried to ride the crux sections and endurance pace everywhere else- and that was enough.  Slowly my heart rate settled to a reasonable rate and I was able to suppress the feeling that I was about vomit, blackout or both.  At that pace I could clear most of the uphill obstacles and actually started to enjoy my ride.  It also reminded me why I’m done racing cyclocross because it’s just miserable.

Once at the top we regrouped and chatted a bit before our individual starts coming back down the same way.  My original thought was that I would blaze the uphill and ride really conservatively down.  Turns out I was wrong on both counts and rode better going down than I’d expected.  It wasn’t that I was ever that fast but I had much less of a gap than I had anticipated even without pads, a dropper post and a pre-ride.

The downhill was awesome.

For a 35 minute descent it went pretty quickly and I only walked two sections- one because I misread the terrain and was way offline and the other was a long, exposed spine of granite that was very slick heading up.  I knew I had to be very attentive and really try to look as far ahead as possible.  Doing that meant I rode clean and stayed upright.  The MX Divide got me up and down the hill safely and predictably without any drama while being a good 7 pounds lighter than any of the other bikes.

As I popped out of the woods and crossed the finish line the band was playing and people were having a good time.  Did I mention that this was run in conjunction with the Vermont Music Festival?  So pretty much we had a great ride, got heaps of swag including Vermont Peanut Butter (hopefully Carrie doesn’t steal it all), Mad River Distillers Rum (it’s as awesome as it sounds- went through it pretty quick), Dirt Rag magazines and Darn Tough socks.  I almost felt a little guilty walking away with so much stuff, but talking with the promoter, John Atkinson, I learned that there were some hangups with permits that made it difficult to widely promote the event until 3 weeks before.  Next year the Wicked Witch of the East Enduro is likely to keep the same mass start hill climb/individual start descent format, and to do that they’ll need to preserve the limited field size to a handful of riders so that riders aren’t waiting for hours to start the trip down.

With my arms full of loot I wheeled my bike back to the car and changed into some cleaner clothes.  The Wiffle Scramble was going on at the same time and between the two stages with live bands, multiple beer stands and food carts it was a pretty awesome setup.  I don’t think there’s anything better than a Long Trail from the tap after an event like that.

I still don’t consider myself a legit enduro rider.