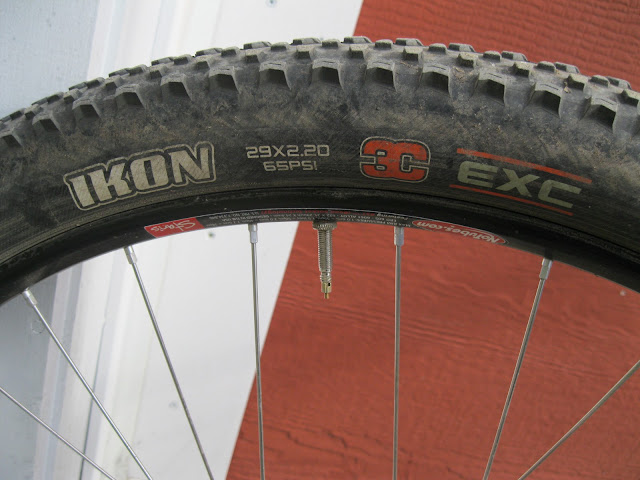 Last summer I tested out a set of Maxxis Ikons in the 29 x 2.2 size.  After testing them on a variety of conditions they became my go-to tire.

In some ways a 29er tire that’s 2.2″ wide and weighs 500 grams doesn’t seem possible within the laws of physics.  Just a few years ago I was happy to run 26″ tires that weighed 500 grams and were 2.0″ wide.  Achieving that low weight for such a large tire is done through a low density, sticky rubber compound and a relatively thin sidewall and tread casing.

For most of the conditions around here that’s a good compromise- the soil is usually soft, sharp rocks are minimal and the low mass helps on the frequent climbs.  There’s a slightly heavier EXO model with reinforced sidewalls and that would definitely be a better option for areas with more rocks and frequent sidewall cuts.

The tread pattern is fairly small but aggressive, and the casing shape is square across the top.  That adds up to mean a fairly wide patch of rubber is in contact with the ground, and as the bike is leaned over the cornering knobs transition smoothly onto the trail.  The tread blocks are in slight chevron pattern so they don’t all hit the ground at once (which increases rolling resistance and slows down forward progress), but there are enough of them spaced closely enough so that there’s consistent bite.

The treads are shallow to medium depth and moderately spaced as shown in the photos below.  It’s not a tightly spaced hardpack pattern with low treadblocks like the Aspen or Small Block 8, nor is it a widely spaced lug/paddle pattern like the mud-specific Beaver.  The tread design and the squarish-casing make this tire very much aimed at the middle of the trail condition spectrum. 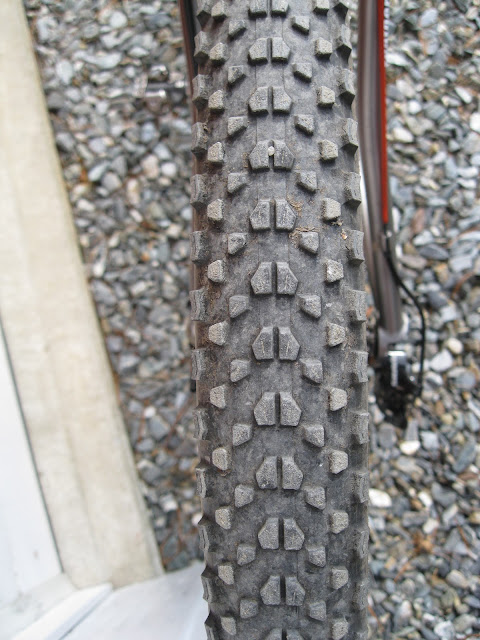 Most of the conditions I normally ride in would be considered intermediate- the ground is firm but not quite hardpack, and there are almost always some slick sections and thin mud.  In that environment the Ikon is very fast and predictable.  As the terrain gets muddier the Ikon really shines when you lower the air pressure a few PSI.  That holds true for most tires, but I found myself running these 2-4 PSI lower than my normal range and it made a huge difference when it came to cornering confidence and wet weather performance.  In general I’ve been running my 29er tires with slightly less pressure than comparable 26er models, and I think the additional width of the 2.2 casing makes the optimal pressure even lower.

When I did run this tire in dry conditions it worked pretty well but didn’t quite roll as quickly as other options.  Last summer we had so few dry days that this was the option for me for pretty much every ride.  On one particularly rocky ride in Upstate New York I did get a cut through the tread casing, and it was big enough that it wouldn’t seal up on the trail and I had to walk out of the woods.  In places like that the EXO casing would be a good investment and worth the weight penalty.

On wet, slick trails, these tires really shine as they’re supple enough to conform to the terrain so the knobs can bite on wet roots and rocks.  In my mind that is a tough combination because the tall knobs on pure mud tires are too squirmy yet shallow or closely spaced treads quickly get packed with mud and are equally useless. 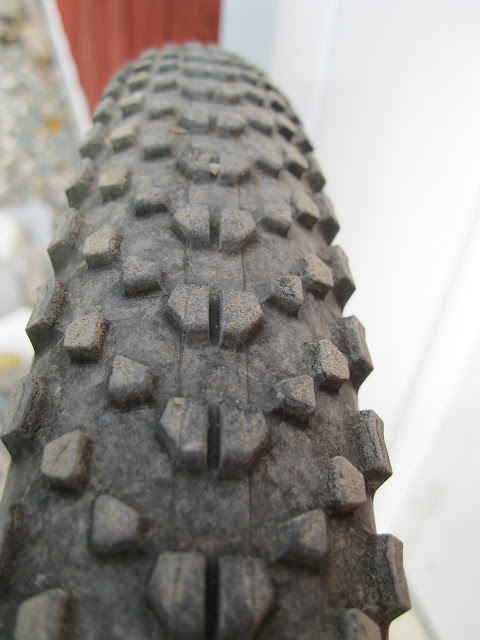 The sticky, low durometer eXCeption rubber adds to the wet weather performance, and although the increased grip is palpable they seem to wear remarkably well.  The pictures show the rear tire after three months of regular use and the knobs are still fairly sharp.
Overall I would summarize these tires as very capable.  They’re fast and stable throughout the spectrum of conditions, and although they may not be the best in pure hardpack or serious, sticky mud, they’re predictable enough to be a great option if you’re not sure what to expect or like to only run one set of tires.  These are definitely race tires, and accordingly their lightweight casing favors riders who go around rather than over trail obstacles.
For more information visit the Maxxis website.
For more posts by Matt check out his blog- www.pro-35.blogspot.com.
Tags from the story
29er, Maxxis Ikon, pro-35, review, tires
0
Facebook Twitter Pinterest
LinkedIn Email