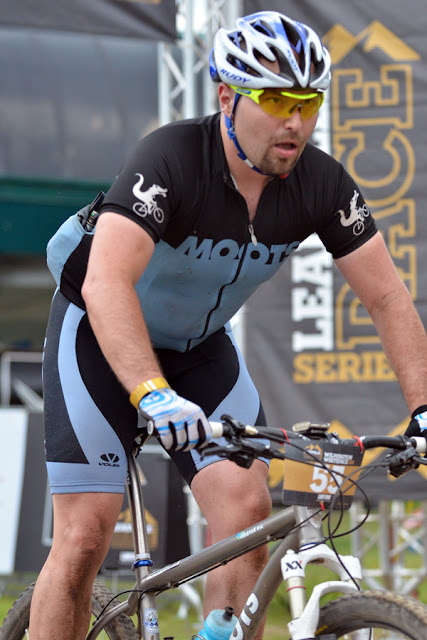 The Wilmington Whiteface 100 is the East Coast qualifier for the Leadville 100.  Leadville has gained broader appeal in the last few years since Lance Armstrong decided to add it to his program, and as a result Life Time fitness has started running a series of Leadville events that culminate with the Leadville 100 miler in August.

I’ve had an interest in doing Leadville since I was 19 and read about it Mountain Bike Action.  It was a much different event then, but it’s gained a reputation as the premier ultra-endurance event in North America.

The Wilmington course shares many similarities with Leadville, namely that it’s a long, out-and-back course on mostly dirt roads, gravel, pavement, a little singletrack and a ton of climbing.  The same elements exist in most 50+ mile races, but in different proportions.  The Wilmington course was very much about dirt and gravel road climbing fitness with very little time on singletrack (less than 8 miles by my estimation) and several riders competed on cyclocross bikes.

Leading up to the event I had some great practice races at Wednesday Worlds but had also been hobbled by intermittent back problems.  My training had been erratic for the past month and I had decided back in February to not put everything on the line to try to qualify for Leadville this year; instead I would do the event for experience to prepare for a run at qualifying next year.

A handful of local racers were also in attendance including fellow Grass Moots team member George LaPierre and Waterbury stalwart Jay-Pro.  I was able to find a local campsite on short notice for small dollars.

If you haven’t been to the Lake Placid/Whiteface area it’s worth the trip.  The region is beatiful and there are plenty of places to ride on and off road.  I’d only seen Whiteface from a distance, and I have to say that in person it is ungodly steep.

After I settled into my campsite I got to bed early partly because I knew I had to wake up at 5:15 AM and partly because I had nothing better to do.  When I awoke Sunday morning I quickly broke camp, put on my kit and headed to the start.  After a smooth packet pickup and short warmup I headed to staging and lined up in the middle of the corral.

The mood at the start line was positive, and although there was no demarcation between ages or categories there was a general agreement that if you looked fast you belonged towards the front.  As we rolled out onto the pavement I slowly started working my way up, and on the long pavement stretches that followed I recalled my decade old pack handling skills and stayed smooth while maintaining my spot.

As we headed onto the first gradual dirt road climb I became aware of my lower back.  Tingling at first, then becoming a dull ache I went from feeling like I could have an awesome day to reassessing my commitment to finish.  The pain started to radiate down my right leg and eventually the light burning and tingling ran from my right kneecap up through my quad, across the top of my hip and into my spine.  Shit.  Maybe I should have gone for the deluxe air mattress instead of the $19.99 Wallymart special that I’d purchased a few short hours before I slept on it the night before.

I settled in with a reasonable group and rolled along trying to not let the discomfort erode my confidence or stamina.  At one point I pulled off the trail and stopped to try to stretch it out, and as I did the small train I had just passed rolled by me.  The whole time I was thinking that if I didn’t finish the pace would be irrelevant, so I stretched as well as I could and pushed on.

At a certain point after that the pain stabilized.  I was aware of it, but it went from almost crippling to a dull background ache.  From then it never got any better or any worse.  After I caught back up with the group I’d been riding with I heard that the course was actually a little over 70 miles, not the 58 it had been last year.  Silly me- I’d been thinking it was close to the advertised 63.2 miles both times and had based my pacing and finishing goal around that.  Now I had at least an extra hour’s worth of riding ahead of me.

The climbs were long.  The middle of the course was mostly loose gravel so on the out-and-back course that meant that the descents were on the same loose gravel.  Every time the road/trail pointed down I put every ounce of Knight’s instruction into reading the trail and made up serious time by staying loose and taking good lines.  Earlier in the race I had been dueling with a guy with aerobars on his Fisher Superfly, and by dueling I mean that he tried to stay on my wheel every chance he got, then would dart around me and get aero when it suited him.  On particularly fast downhill I passed him on the outside of a steep and chundery corner, and took particular pleasure in doing so. 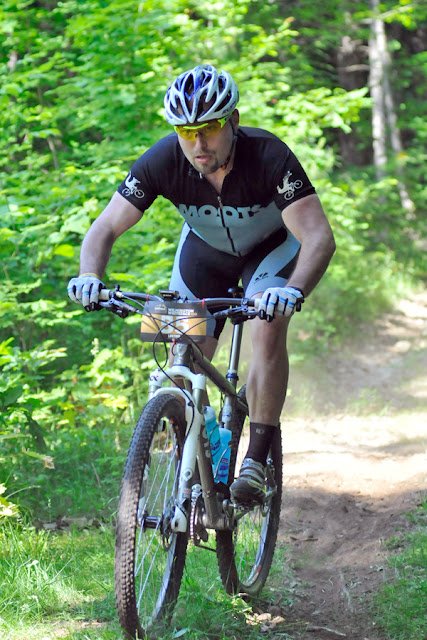 On pavement, gravel and dirt roads there was a consistent theme of long steady climbs and fast descents where I regularly was hitting 40-45 mph.  We worked our way back toward Whiteface and hit the second short singletrack section.  The trails were nice- reasonably smooth with sinewy corners and well-worn lines despite their newness.  I managed to pick off a few more riders on the short sections with some less-than-stellar riding and was back on the pavement and headed for the final climb up Whiteface.

We darted off the pavement and down a quick chute towards the flume at the bottom of the mountain, then the trail turned up.  Slowly at first it got steeper and looser as we went with a particularly sharp and nasty uphill right before the last aid station.  Of the six guys in my group I was the only one who cleaned it.

At the aid station I handed two empty bottles to a volunteer and drank one before he’d filled the second.  I knew the last climb was tough, even if I didn’t yet know how tough.

As I made my way out of the aid station and dawdled along in my lowest gear a lone, clean rider rolled down the trail and stopped to wait.  “Hey guys- welcome to Whiteface.  You’re almost there.”  said the rider who I quickly identified as none other than Dave Wiens.  Cool.

What followed was one of the nastiest climbs I’ve ever seen: a boulder-filled moonscape of loose rock and gravel that criss-crossed the fall line ever so slightly as it made its way up the mountainside.  I’m not sure how long it was, but it was the mountain biking equivalent of hand-to-hand combat- slow, painful and completely exhausting.  Like most riders around me I rode at most 20% of it, and my pace was so slow that my speedometer kept dropping to zero because it doesn’t recognize speeds below 2 mph.

Once I got to the top a hair-raising descent straight down the face of the mountain on the same rocky surface was all that stood between me and the finish.  I passed a handful of riders that were trying to pick their way down as I tried to keep the bike upright.

In the end I finished in a little over 6 hours.  My original goal based on last year’s course was 4:45, but considering  additional 12 miles and how much trouble I had with my back I’ll count that as a success. 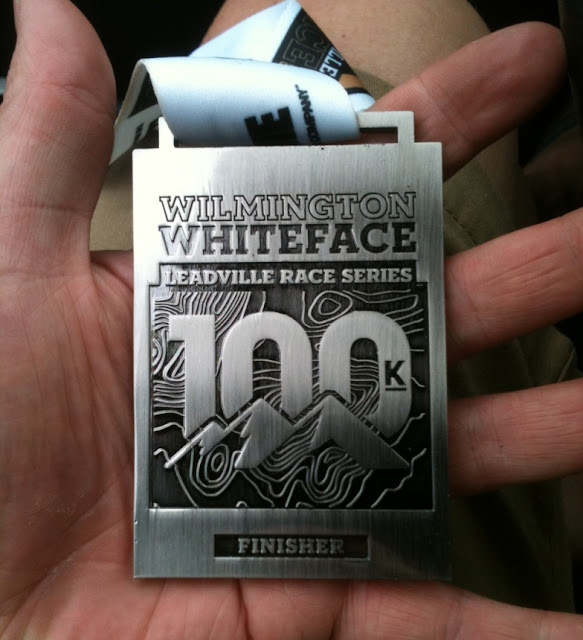