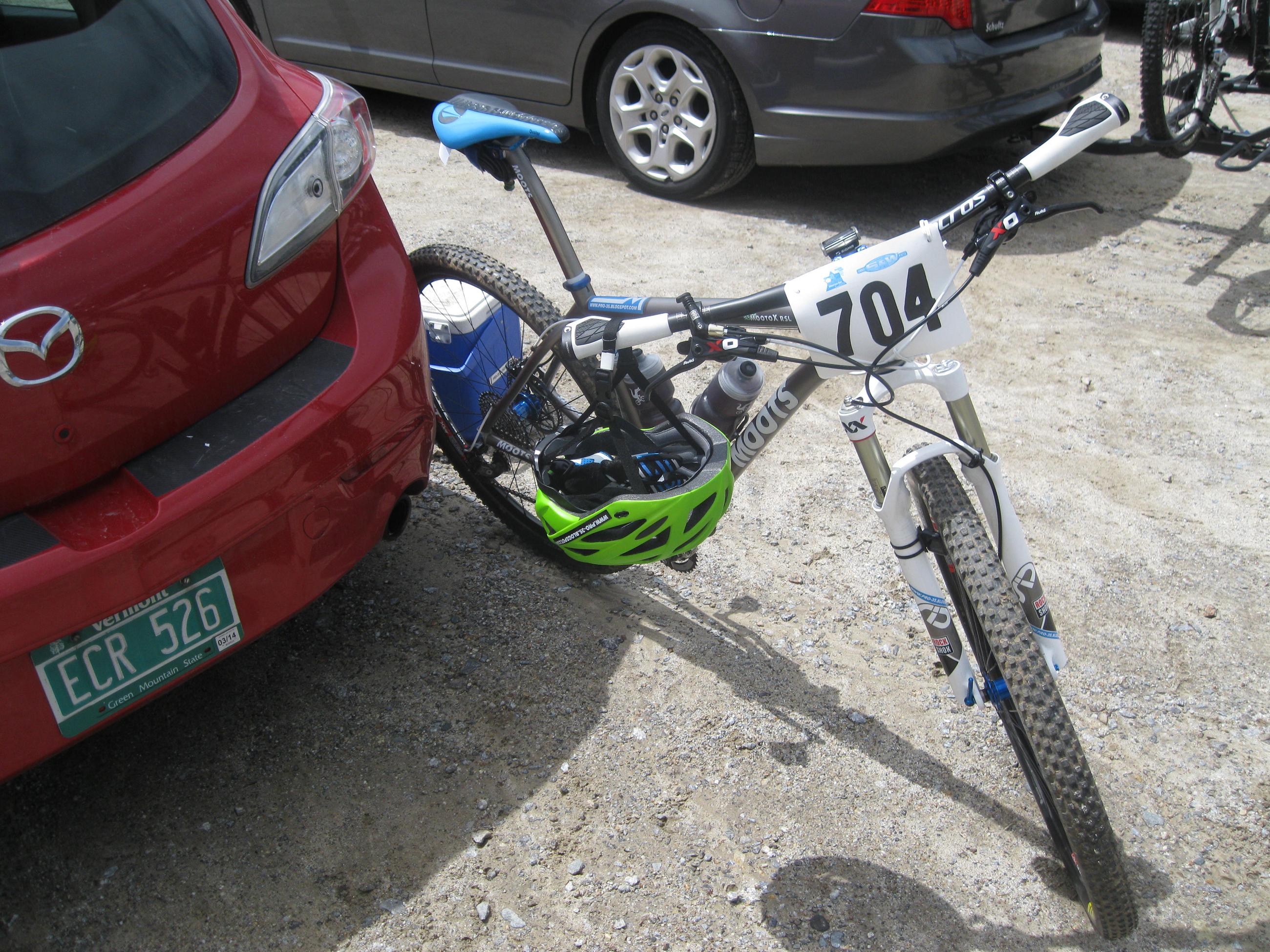 I knew the forecast was for rain, but not that much rain.

The week leading up to the race I had some decent and varied training with some long road rides, free ride trail skill sessions, a Catamount race and some time in the woods on the race bike.  It had been hot- very hot actually, and I was able to take advantage of the dry weather with some solid days of training.  The rides were great but definitely took more out of me than I had anticipated.

Wednesday was Catamount, and based on the previous week’s miserable experience in the mud I decided to give the Maxxis Beaver mud tires a shot.  They’ve been sitting in the basement unused for over a year but after feeling like the all condition Ikon wasn’t quite grippy enough in the prior week’s extreme mud I decided to run them since more rain was in the forecast.    Of course we did get a ton of rain, but it all fell after Wednesday’s race so on a dry, hardpack day I was running super aggressive and super slow tires.  I went into the race tired, and pushing around unnecessarily sluggish treads didn’t help and I dejectedly pulled the plug a lap early and headed to the car frustrated with my performance.

Even though that was a training race I was disappointed with myself after some strong days of training leading up to the event.  I know I can handle endurance pace, but I always have a hard time with the short, high intensity stuff, and that wears on my confidence.  Somehow I’d managed to get my back to start acting up again so on top of going slow I was hobbling around the next day with ice packs pressed on my lower back and hip flexors.

Feeling tired and sore with a dismal forecast meant that I had to engineer a plan for the race.  It was supposed to be for training anyway, but that wasn’t enough.  I thought about racing in baggy shorts just to mix it up a bit.  Ultimately as I assembled my gear I came up with a motivational strategy that revolved around my all time favorite cycling fuel- Coke. 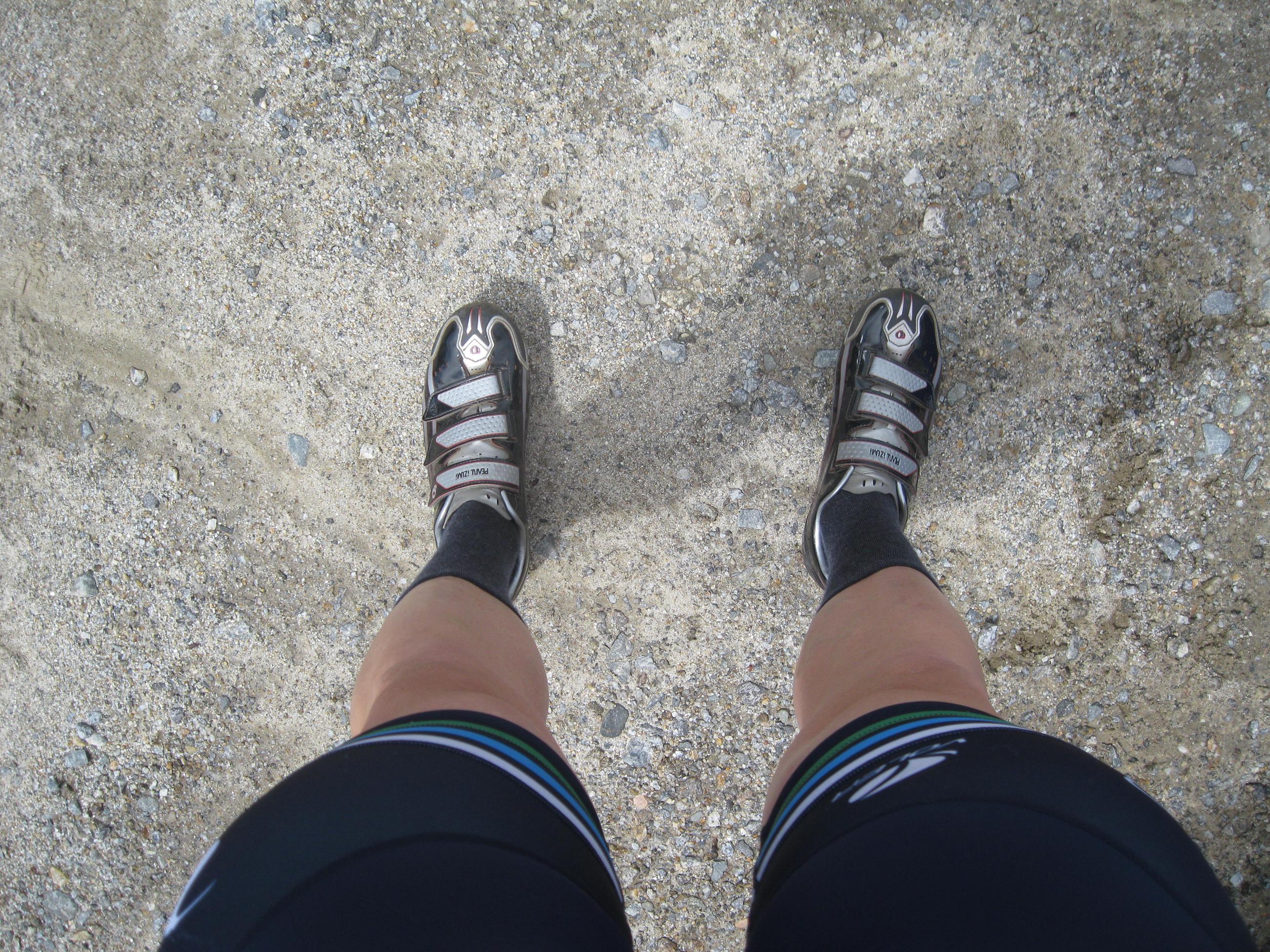 I’ve mentioned that in other posts, but what’s really funny is that I never drink Coke unless I’m on the bike.  Never ever, yet somehow when I’m out on a ride there’s nothing I want more so I decided to use that to my advantage.  The deal I made myself was simple- I needed to do at least 2 laps before I could quit, and if I did 3 laps I could have a Coke.  In 2011 I did the same race in similar conditions so I had an idea of what to expect.

It was pretty clear this was going to be a very muddy day and having the right equipment on hand was going to be critical so I packed my usual race kit plus my mobile cleaning kit and 5 gallon bucket.  The bike got one more run through and new set of batteries for the computer and cadence sensor (yes, I use cadence on the mountain bike).  It looked like all the settings were fine and the clock looked right so I didn’t think any more about it.

Once I got to the venue on Saturday morning I was treated to a lengthy pre-race meeting which took up more time than I’d planned on.  After that I got dressed, stashed my bottles in the drop area and headed out on my warm up.  The bike felt good- responsive, quick and smooth.  I checked the clock on my comuter- 10 minutes before start time as I spun around the far end of the parking lot.

Then all of a sudden I heard a voice on a megaphone counting down from 10- then an air horn- the race had started and I was still fucking around in the parking lot.  In a full panic I ran up the stairs past the lodge carrying my bike.  I frantically asked the officials if I could still start.  At least I think it was an official- I just asked a woman in a black t-shirt standing by the timing tent and she said it was cool so I hopped on the bike and started going.  At this point I’d spotted the whole field a solid 2-3 minute head start.

My plan was to start slow and ride consistently letting the conditions weed people out, and I certainly did get to start at the back with plenty of rabbits.  As I pedaled through the first section I saw how slick it was- very slick in fact with every sharp edge and rock face spray painted orange for caution.  My heart was racing from the nerves and as I tried to calm down and ride steady I could feel I was burning a ton of energy without really getting anywhere in the process.

In one of the many murky, deep puddles I heard a skip, then a horrifying crunching sound as the chain was dumped onto the spokes.  As I tried to pull the chain back onto the cassette I saw that a spoke had been cut clean through and was dangling from the rim.  Of course this was on my brand new hand build Hope Evo hubs with Notubes Crest rims and super flashy Sapim CX Ray spokes.  Turns out the CX Rays aren’t very chain resistant so after being ridden a total of 30 miles I had to wind the broken spoke around its neighbor like a strand of bailing twine.

At this point I was really pissed.  The handful of places I’d clawed back had all slipped away and I was back to dead last.

The course was slick, but as I pushed my way through some very deep puddles (one in particular submerged the whole caliper) and careened off of some rocks.  There was one section in particular I remember from 2011- a nasty, rocky drop that I chickened out on every lap.  It was slick just to walk down and I couldn’t even see a line.  This time it was still in the course- and still nasty, but the issue was the slick and hobbly run-in rather than the drop itself.

Each lap had about 870 vertical feet out of climbing per lap and to be fair the course designers did a good job of not making it all up or all down hill, but regardless there were some steep exposed climbs.  Believe it or not that’s where I reeled in riders every lap.

Once at the top there was a descent- not a super fast screaming descent, but a section that followed the fall line and in places literally was a murky trench with a creek running down through it. Most of the course got drier and improved throughout the day, but the creek got deeper and slipperier.  I did reasonably well on that and was able to leverage my Highland skills to look further ahead, brake with one finger and let the bike float under me. 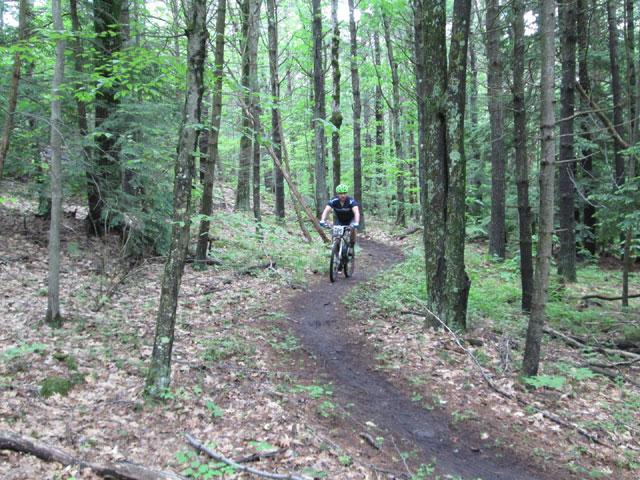 Usually I hit my stride about half to three quarters of the way into the race and this was no exception.  Between laps 3 and 4 I caught 4 people in my category in rapid succession and as I was dialing in my lines I was starting to have some fun knowing where I could get away with a little extra speed and where I could keep off the brakes.

Heading into my fifth lap I stopped to get more water bottles and GU, plus another Coke for good measure.  I also lubed my chain since it had been fully submerged and splashed more times than I could count.

Back out on the course on the first roll down the chain dumped off the cassette and sucked around the chainstay.  I stopped to check it out and saw the short piece of the broken spoke by the hub had wedged itself into the back of the cassette.  Shit.  It had been skipping intermittently before, but now was not going to spin more than a full rotation without pushing the chain along. 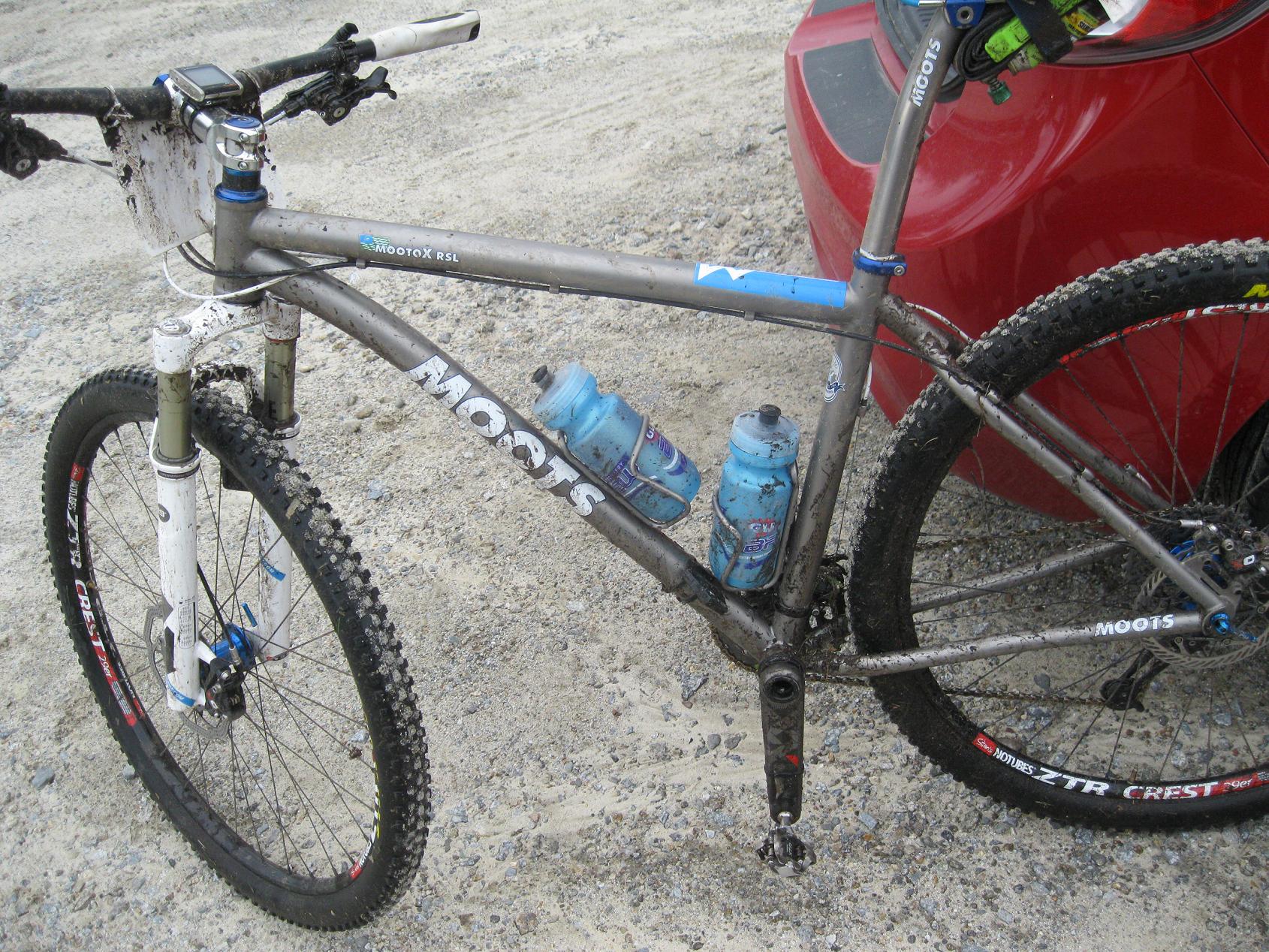 Four and a half hours into a six hour race I was unable to coast and had to pull the plug.  The tech tent was manned until 3 PM and it was now after 4 and although I carry tools with me a chain whip and cassette wrench aren’t usually in my pocket.

Shown above is the bike after being hosed off at the tech zone.  Overall I had been starting to feel decent so I was pretty dejected to be unable to finish.  With a full calendar of races still to come I stewed about what I needed to do to improve and how I would be ready for the Stewart Six Pack on June 30.

Any idea which socks those are? 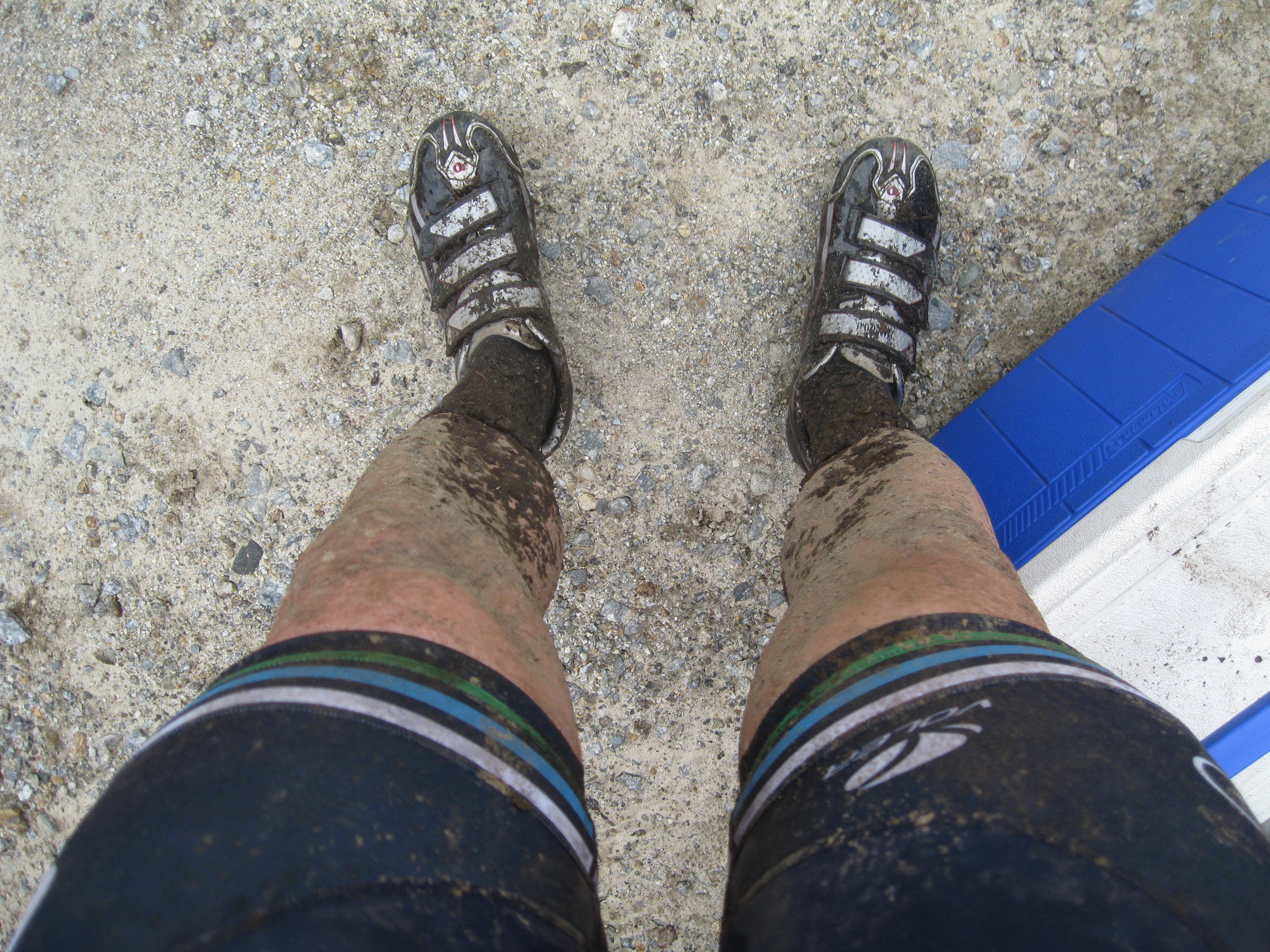