If I had to choose one word to describe last weekend’s race it would be “noise.”

Not in terms of volume, but in terms of distractions and my inability to perceive things as they actually were.

The race in particular unfolded like the first minute of Tool’s “Rosetta Stoned” with the guitar slowly getting into tune and audible vocals that are just obscured enough to be unintelligible.

So what happened?  Well nothing that dramatic, but my original plan was shifted when I got the call to be at the Kingdom Trails for a press event on Saturday afternoon.  Cool, except that I was heading to Boston to race the Land Mine Classic Marathon on Sunday and that was neither part of the plan nor really on the way.  Long story short I decided to make it to the Kingdom Trails knowing that if I was careful I could still make it all work.  It wasn’t completely in the wrong direction either.

Friday night I was wound up.  Nervous even.  And excited.  I don’t get to do things like this very often and that meant that I wasn’t sure how it would go.  Saturday morning I scrambled to get everything ready for the marathon, the press event and spending a couple days in Boston after the race.  It was going to be a full car.

The timeline moved up on Saturday and although I was late I got there at a reasonable hour considering everything listed above.  From there things got weird.  There was neither product to demo nor apparel for the shoot, so what was supposed to be a swag & photo expo never materialized.

The silver lining was getting to spend time with MTBVT teammates Knight Ide and Ali Zimmer.  I’d never met Ali before, and after the usual intros the first thing she said was “would you like some champagne?  I have two bottles in the car and I can’t drink it all myself.”  Cool.  Knight and I caught up on the chair lift and discussed his solid outing in the morning’s Enduro.  His wife had a good day out as well and was likely to get on the racing wagon.  He’d also heard about my crash in the Wildcat so I guess I’m famous.

At around 5:00 I packed up the car and got on the road.  Fortunately the trip to the hotel was smooth and uneventful.  In spite of the recent renovations they managed to maintain the freshly smoked-in smell but I was still able to get some solid sleep in a reasonably comfortable bed.

Sunday morning I got to the event and prepped as I’ve done many, many times before.  I headed out on a quick pre-ride and was amazed at how relentlessly rocky the course was.  Not small, loose rocks, but large, square-edged, Pennsylvania-style embedded and unyielding rocks of various sizes all over the place.  I’d raced the XC on the same course 11 years earlier and remembered it being bumpy, but not this bumpy.  Needless to say I was really glad to have brought the Divide instead of the RSL.

The course was reasonably fun- fast, almost completely flat, and littered with the aforementioned rocks.  There were very few dangerous spots so the technical nature was more about picking the best line to maintain your speed rather than staying out of the hospital.  Still there were crashes, and a couple of guys went down at the start after touching wheels.

The gun went off and we snaked around the parking lot and into the woods.  The pace was high- road bike high, and riders were jockeying for position like it was a short track rather than a marathon.   I slotted into the field and managed to maintain my spot.  For the first 10 miles I was in the thick of it and had basically been pinned at XC start pace.  I felt good and wanted to stay with the group but I knew I could never hold that intensity for 50 miles no matter how flat the course was so I let the group go.  Somewhere along the line I settled into endurance pace and was maintaining my spot with a few other riders.  I didn’t feel great, but I was riding pretty well and was waiting for the huge starting effort to settle into my legs.  About 15 miles in it did- and I didn’t crack, but I did slow down and struggled for a few miles to get back on pace.  That’s all a normal sequence of events for me, but I’m usually not that fast off the gun and settle into endurance pace much earlier in the race.

With my pace re-established I was riding smoothly and learning what to expect from the course.  Even on the silky smooth Divide I was getting beaten up with the relentless pummeling of rocks after rocks after rocks.  I stopped after lap 1, grabbed a Coke, some more GU Chomps and headed back out.  The rear tire had been hitting the frame an awful lot and I checked to make sure the axle was still tight.  Fortunately it was, but the rear wheel had gotten so battered that it was de-tensioning.  I stopped quickly and retightened it which held for a few miles, but quickly the wheel loosened up and tire was rubbing again.  Dammit.  The rear tire was also getting low from burping- you guessed it, on some rocks, but was still holding air.  After a second re-tensioning stop it was clear the wheel wasn’t going to hold.  All of the starting and stopping had really sapped the reserves I still had, so although I’d started fast and was riding well I pulled the plug.

Monday morning I saw the results and figured based on my lap 1 time that I would have come in about 4:35 or so- 20 minutes out of the top 10 in Pro/Cat 1.  Fuck!  My placing wouldn’t have been anything but I was close.  Within 20 minutes were a handful of good riders, and just inside the top 10 was New England legend Mark McCormack.  Holy shit.  Retired or not the guy can still ride, and obviously he hasn’t let himself go to seed.

My normal post race routine is to do some light workouts for a couple days and eat pretty much whatever I want.  Monday was no different, but as I ate the largest hamburger I’ve ever seen I stewed about my missed opportunity.  Dammit.  Can’t believe I was that close.  That’s not really that far off, sure enough to not even be an also ran, but still that’s a gap I couldn’t have imagined a year or two ago.  And a rider I’ve beaten at Catamount made it into the top 5.

After commiserating with/swearing at/crying to/leaning on Spinney I went out to the car, pulled the bike from the trunk and set to the task of retensioning the rear wheel.   Without a work stand I flipped the bike onto the bars & saddle and without a truing stand I used my well calibrated index finger as guide.  This of course was outside of the burger joint where anyone paying attention would have noticed that I’d gorged myself then played traveling mechanic within the span of about 15 minutes. 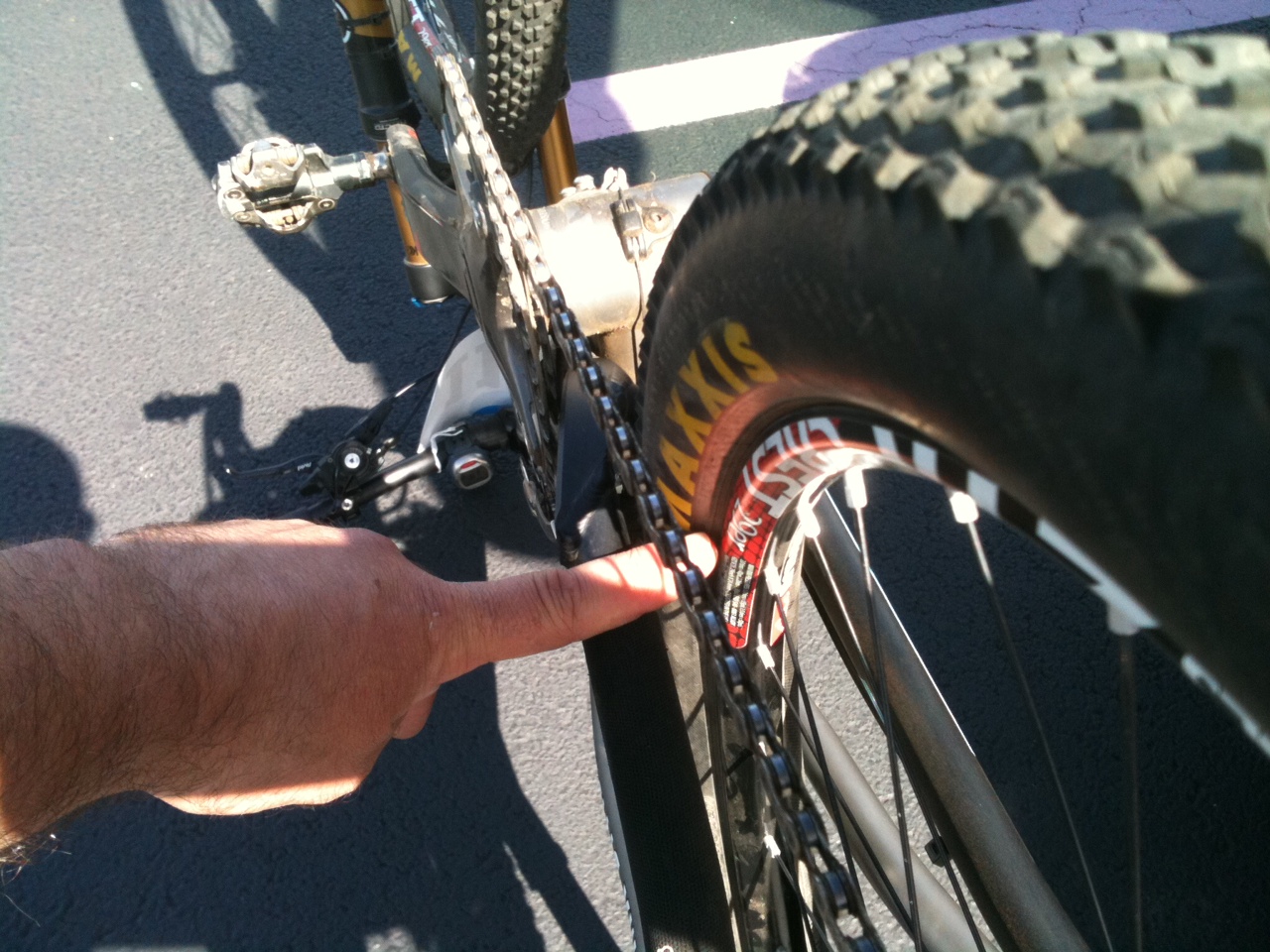 I need to get in a short ride to start recovering from the effort I put in yesterday.  I’m getting close, I just didn’t realize how close.  With some tweaks to my training and diet I can keep improving.

We’ll see if the wheel holds.  If not then I’ll get another one built.  It’s not going to stop me.

I’m getting close- I just need to stay focused.