Missed part one? Get up to speed here 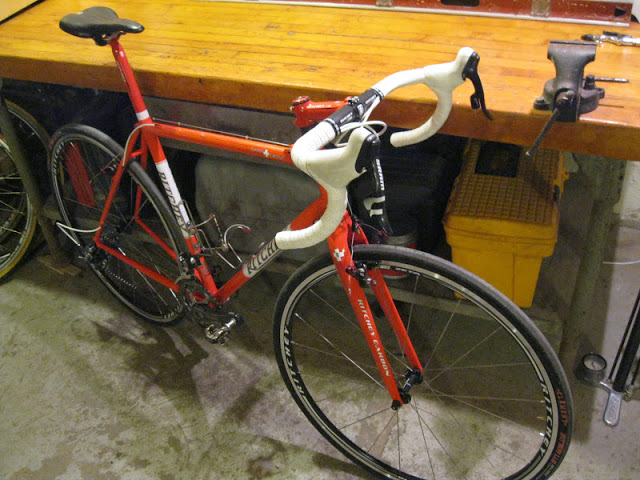 With my ‘cross season over after a single race I’ve made some changes to the Swiss Cross setup.  Although inherently a race bike the Swiss Cross’ smooth ride and predictable handling make it a good candidate for off season dirt road, gravel and even pavement duty.

After finishing second in Mountain Biking at the 1996 Olympics Ritchey- sponsored mountain biker Thomas Frischknecht competed in the Olympic road race on short notice his steel Swiss Cross since he didn’t travel to Atlanta with a road bike.  Granted times have changed and steel road bikes are extinct on the international circuit, but fundamental design and capability of this bike is consistent.

A pure cyclocross race bike is designed to handle the rigorous and specific demands of cyclocross racing- short, sharp anaerobic efforts on punchy, grassy, muddy, slick courses for 45 to 60 minutes.  The effort on a cyclocross is primarily to navigate a series of obstacles and barriers then accelerate back up to cruising speed as quickly as possible.  To excel in those conditions ‘cross bikes need to be nimble at low speed, quick around sharp corners and stiff under power with excellent mud clearance.  Although ‘cross bikes share the same 700c wheel size as road bikes the aforementioned race-centric attributes often make them harsh riding, tippy, unstable at high speed and equipped with very poor brakes compared to a pure roadie.  Cross gearing is also far narrower as the top speed on a cross course is at most 30 mph and any steep uphills are tackled standing on the pedals or off the bike and running.

Part of what makes the Swiss Cross more viable as a road machine is the steel frame and comfortable carbon fork.  The same characteristics that smooth trail chatter also work their magic on tarmac, but the key to translating that ride onto pavement is to use a slightly wider tire at lower pressure.  While road bikes are designed around 23 mm tires at 100 psi cross bikes are designed around 33 mm tires at 30 psi so running a standard road setup on a cross frame often turns it into a jackhammer on rough pavement.  For this experiment I’ve been using 26 mm tires at 75 psi with good results.

You can see here that I’ve wavered a bit on my fundamentalist position with two bottle cages (or bidons if you prefer) but the rest of the bike is entirely as I…well, as I intended to race it anyway.  As much as I’d like to be a purist about the bottle cages I only have so many jacket pockets and it’s just not feasible to keep stuffing bottles into my pockets when I need to carry some additional layers. 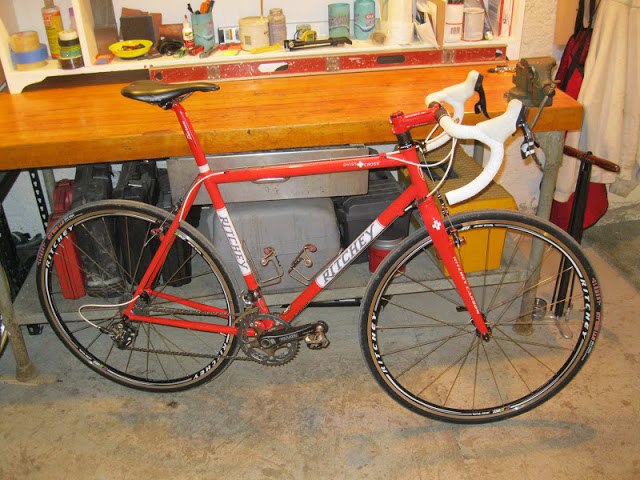 Since I first built it up I’ve swapped out the stem and post for the Ritchey WCS wet red models you see here.  I had misgivings about getting red components as they’re likely to stick out on any other bike in the stable, but since they match the Swiss Cross perfectly I felt it was completely appropriate.  The more I look at them the more I like them, and with minimal fiddling I’ve been able to run the stem in the downward position although it’s still pretty far from being slammed.

I’ve also swapped out the tubular EA70′s for the Ritchey WCS Zeta clinchers.  So far those wheels have been great with both the 33 mm ‘cross tires and the Clement Strada LLGs pictured here.  Although there’s a lack of quality pavement around here there are miles upon miles of dirt roads.   I was looking for a wide, lightly siped tread for exploring said dirt roads and found the Strada.  After a few rides it’s proven to be a solid performer and although it’s claimed to be a full 28 mm width it only measures out to 26 mm on a standard 19 mm wide rim.  That means there’s the added benefit of being able to use this same wheel/tire setup on my road bike without any clearance issues or additional fiddling. 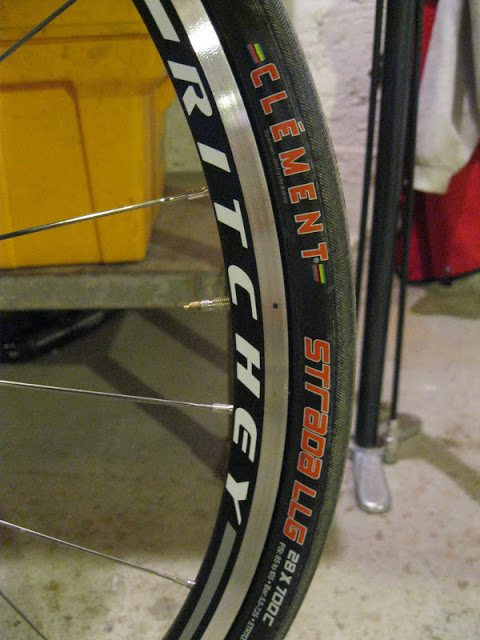 I’m still not a fan of cantilevers, but if you’re going to run them I suggest giving the Avid Shorty Ultimates serious consideration.  They’re a modern machined aluminum version of the classic mid-90′s mountain bike cantilever and offer the best feel and stopping power of anything I’ve tried.  The setup is unique but straightforward after you read the instructions- they don’t take long to setup but they are quite a bit different from the TRPs and Shimanos I’ve ridden recently. 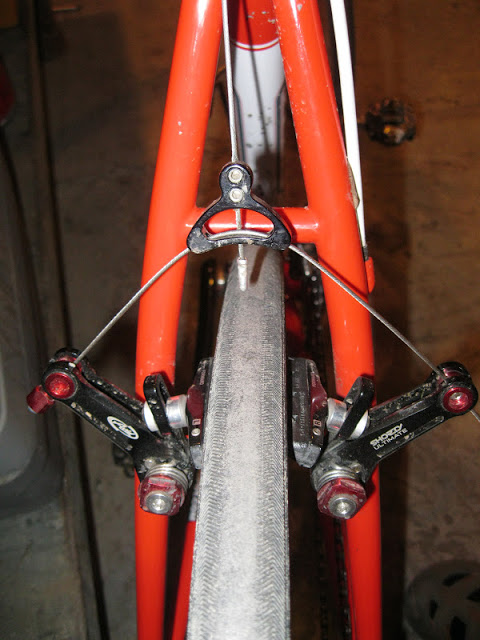 And of course there’s plenty of clearance.  My experiments with getting the Redline setup for dirt road duty were a horrendous failure mainly because the frame was so stiff but also because I used 23c tires.  The Swiss Cross is a notably smoother ride, but the wider tires at significantly lower pressure also deserve some credit.  The extra tire width also makes the massive clearance slightly less obnoxious. 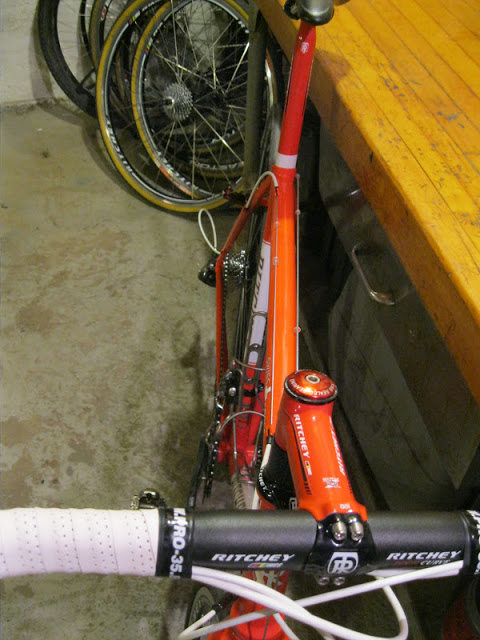 More red.  I’m really getting into this bike, and the white cables/tape/hoods combo is really growing on me next to the all red frame/fork/stem/post.  There was an internal struggle about where to put my Pro-35 decals so I opted went for the more subtle finishing tape accent and non-drive chainstay placement.

Until the snow really starts piling up I’m going to keep riding outside, and with the local trails all closed I’ll most likely be out on the Swiss Cross.