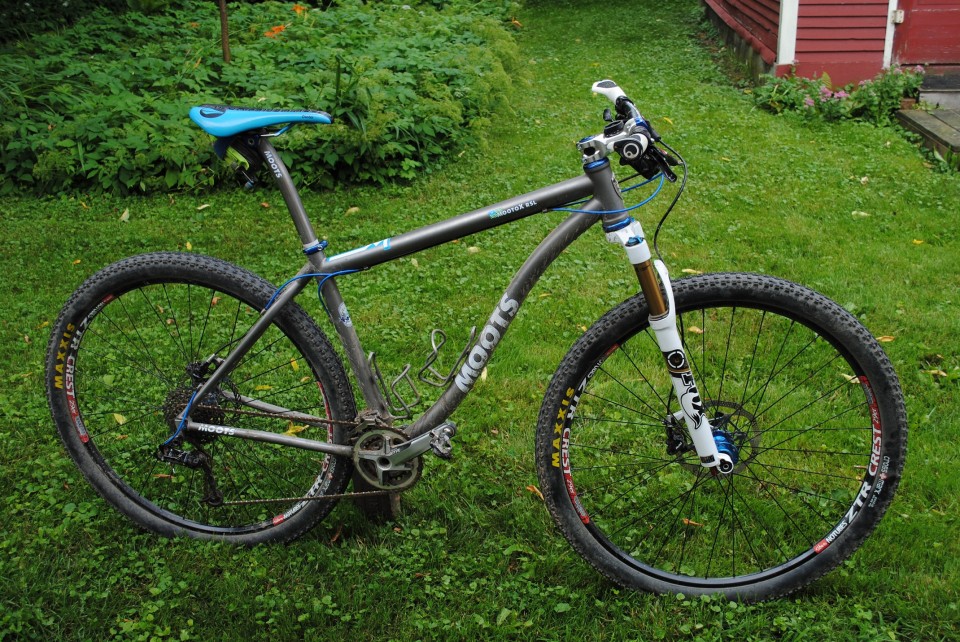 For 2014 Moots has updated their stalwart Mooto X RSL frame with some subtle geometry tweaks.

When the MX RSL first came out in 2011 I was among the lucky few to get one of the first production models.  It was an incredible machine that offered real race performance and titanium ride quality with current bottom bracket, head tube, and seat post configuration.  In short it was a legitimate run at a lifetime race frame that took a forward-looking approach to the ever-changing standards of the bike industry and 29ers in general.

2011 was sort of the midpoint progress-wise between the early models of a decade ago and the current configuration of today.

Since then some details have settled out around what a 29er XC bike should be and 27.5 long travel bikes are getting all of the meddling attention that goes with being in the spotlight.  Travel has gone up from 80 to 100 mm and with the combination of tapered steerers and QR15 axles pretty much a given.  Those are all good changes and while the 44 mm head tube on the RSL series allows for an external lower race (as shown above) it doesn’t account for the extra height which in total is about 28 mm taller that the original 80 mm/straight steerer design.

I ran that new school 100 mm/tapered setup on my ’11 and while it worked I never quite felt right on it.  It didn’t bother me too much while riding but I was very aware of how strange it felt when I switched back to riding the MX Divide which had a completely dialed, bulletproof feel.  Certainly the taller and slacker front end were the reason, but the exceptionally short chain stays meant that the weight balance was more heavily rear-biased than intended.  For some riders that’s completely fine, even preferable depending on the discipline, but it meant that I had to aggressively shift my weight forward get up and over the center of the bike.  I knew all of this going into making the decision to run that fork configuration so any unintended consequences were purely my own fault.

The 2014 has some notable changes relative to the 2011 with the most visible being the double curve down tube introduced for 2012.  There may be structural reason for it, but I can’t tell a difference beyond the aesthetics.  What’s less obvious are the increase in head tube height and head angle changes made to dial in the handling just a little bit more.  There weren’t any published stats on what the geometry was with my non-standard setup and I don’t have any tools accurate enough to measure the difference so I assembled the new bike with the same parts and took it out for a spin.

Tall front ends are an issue for some 29er riders on medium sized frames or with long travel forks, but not for riders like me that are approaching 6′ tall on a 19″ frame.  The head tube is a full centimeter taller so my previously cut steerer ended up being just long enough for the stem to sit flush against the top of the bearing cap.  Slammed!  It looks cool for sure but added a layer difficulty for setup as I needed to try different stems to make any height adjustments.  Ultimately I went with a 0 degree rise rather than the 10 degree I’d been using.  Right now I’m really liking the 700 mm wide bar with a 90 mm stem but that could change if I stay on the wider bar/shorter stem bandwagon. 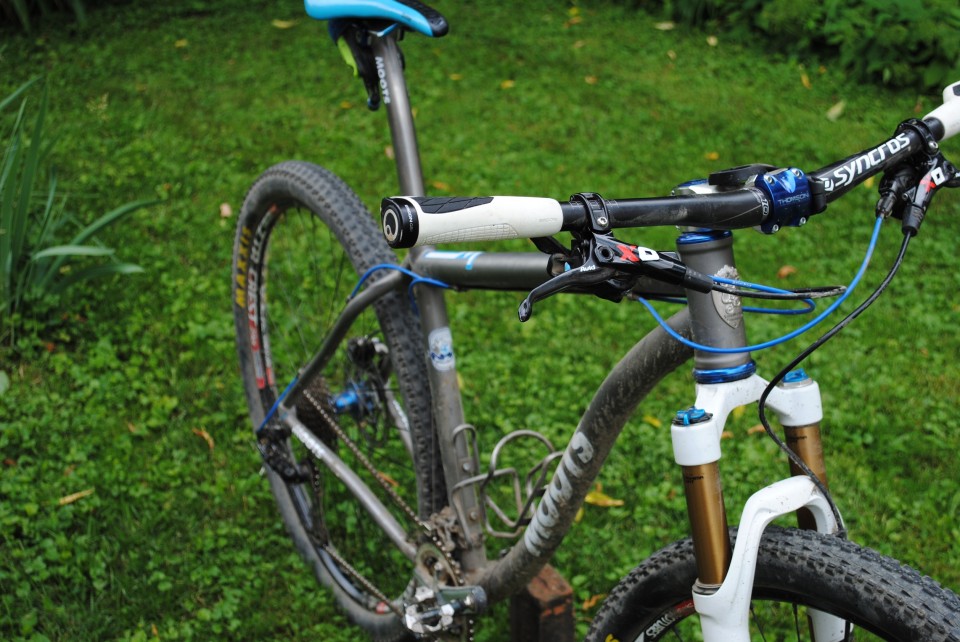 For all intents and purposes the bike felt identical to its predecessor which only made the steering changes that much more obvious.  Much like my road going RSL build earlier this spring I re-used all of the same build kit from my previous bike with the exception of the cranks and bottom bracket; it was a controlled test environment with limited variables.  The cockpit length, wheelbase and overall ride feel remained unchanged but the steering was definitely quicker.  Not twitchy or eager, but no longer did I need to do the go right to setup to go left for switchbacks like I’d become accustomed to- just forget all of that happened and point it where you want to go.  Cool.

As a race bike the RSL is hard to beat, and the subtle changes really address just the shortcomings without changing what was already perfect.  Total build as shown is just over 22 lbs including the Stages XTR power meter and the Garmin Edge 500.  The ride is smooth and predictable while feeling stiff and efficient like a road bike under power.