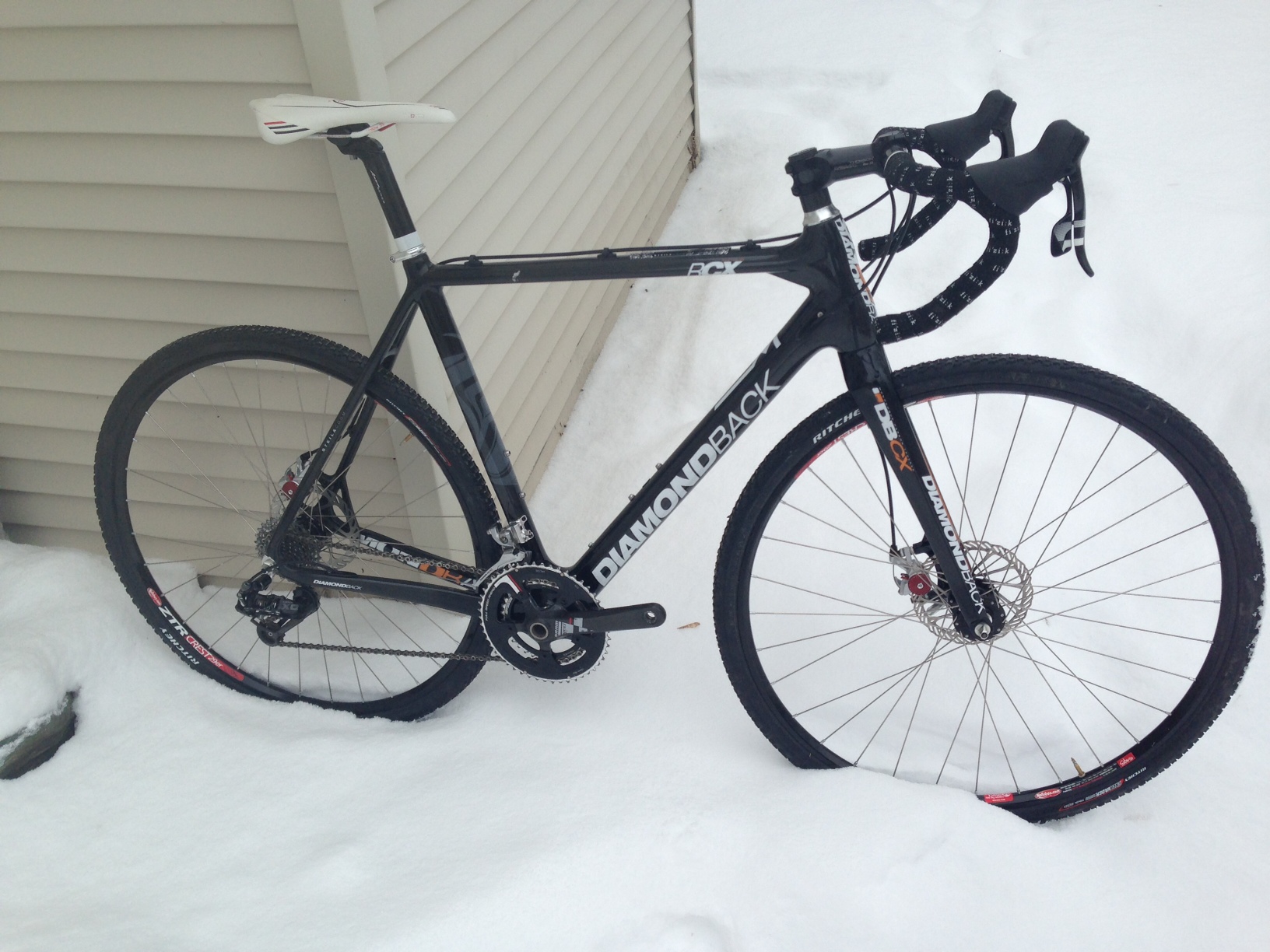 Here it is- the mostly complete RCX build I’ve been working on for the last few days.

It’s a cool bike and the fit is great, but there was some weirdness combining well-worn, mismatched components for road, mountain and cx disciplines into a single machine.  At the moment it looks a little confused with the wide and knobby Ritchey ‘cross tires next to the compact road gearing and disc brakes.  It looked even weirder with the road pedals and bottle cages so I took those off before snapping the picture. 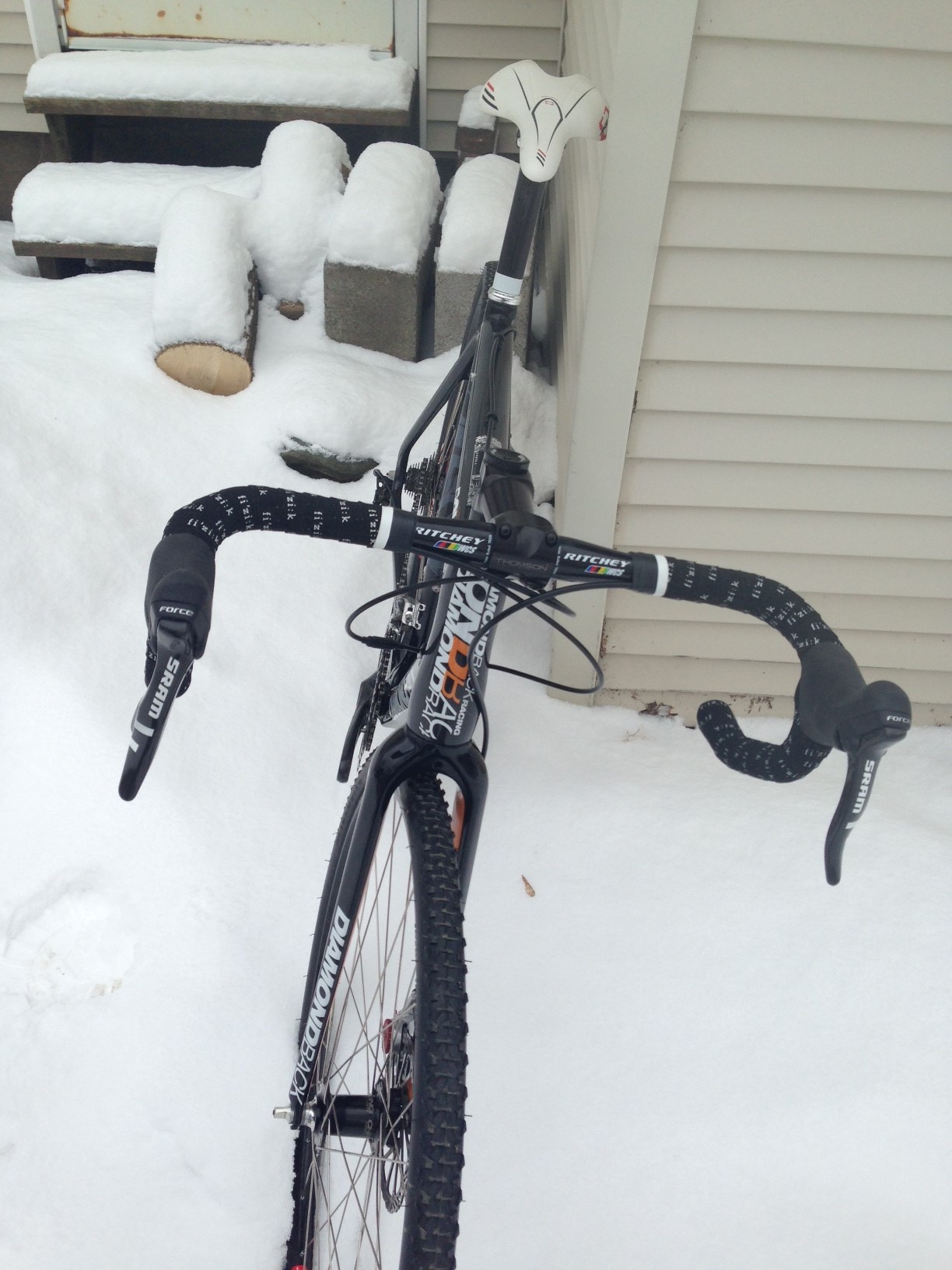 In early season mode this bike is going to be a bad weather and adventure road bike so it has a road saddle, road gearing (low road gearing, but it’s still road gearing), and identical fit to my road bike.  In ‘cross racing mode I’ll dump the bottle cages, swap in a less pointy saddle and make the position a little more up and forward so I can be better positioned for quick accelerations.

When it’s time to switch the gearing I have several options as the crashed (yep, from the big crash) X0 rear derailleur still works great and will handle anything from a 26t through 36t.  I’ve considered the idea of running a single front ring with an 11-32 out back or a more common 34/44 or 36/46 matched to an 11-28.  My original XX GXP crank would work great with a ~40t single ring, but so would the current Red setup.  Recognize those?  That’s the unnecessarily scratched crank with the early pro steel cage Red derailleur that were on the Compact until earlier this year.  I got tired of their intermittent performance and went to new Red Yaw front derailleur when I installed the Quarq.  Those aren’t supposed to work together but in reality they work better than those designed for compatibility.  Hopefully the cast-offs will serve me better in this application.

At the moment I’m not sure about what pedals and tires I want to run.  It was a battle to get the Excavaders to seal up tubeless, and for bad conditions it will be nice to have a little more control and room for error.  The other option is a wide and well-siped or file tread-style road slick in 25-32c.  That would be smoother and faster on the pavement when the additional tread isn’t necessary.

For pedals my trusty XTR is the best option for ‘cross racing, but for now I like the idea of using road pedals and shoes because it’s easier to layer multiple shoe covers to keep my feet warm.

So yeah, I think discs for road  are a bad idea, and using a 140 mm rotor as a standard makes that bad idea even worse.  You couldn’t stop a coffee spill with a 140 mm rotor so I think the disc brake guys don’t ride road bikes and vice versa.  The big thing here is that road bikes need more stopping power than mountain bikes, not less.  On fast descents I’ll often exceed 50 mph- and I never go that fast off road.  Sure, motorcycles go that fast and they use disc brakes but the rotors are almost as big as the wheel, and with that kind of speed you need some serious heat disappation.

For ‘cross discs make a lot more sense as the average speed is less than 15 mph and there are no long descents.  Still I’d strongly recommend going with the TRP dual piston Spyre or really anything with dual piston and without the Avid tri-align system.  I got the BB5r shown here because it was the cheapest option and I’m expecting these to get hit pretty hard with road salt; they’re likely to have a pretty short lifespan. 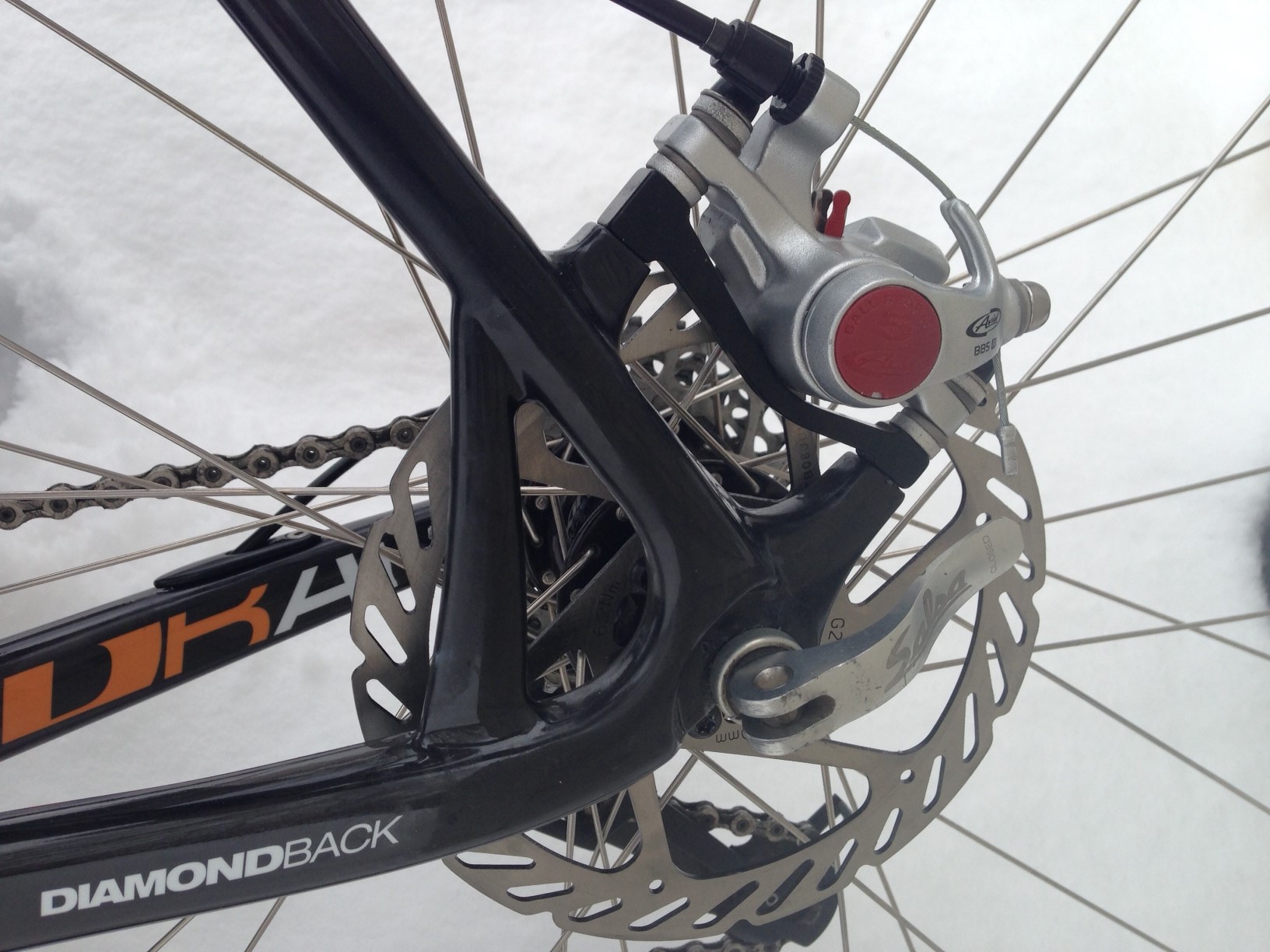 It was cool to be able to use so many parts that I already owned.  I even got to reinstall a Chris King qr front axle after I swapped it over a QR15 over the summer.  Had the handlebar tape I needed, too.  The one major unforeseen issue was the SRAM road shifter/mountain bike rear derailleur where there are no barrel adjusters.  Of course I learned that after I’d gotten the internal cables run (a rant for another time).  I remembered I had one of these barrel adjusters designed to go into the end of STI shifters when brazed on cable stops started disappearing from road bikes.  It dropped right into place and fits pretty smoothly with the cable routing, and as long as I don’t have any heel clearance issues it should be great.  I had to run an in-line adjuster for the front derailleur but really fought hard to avoid it for the rear too.  Those things suck. 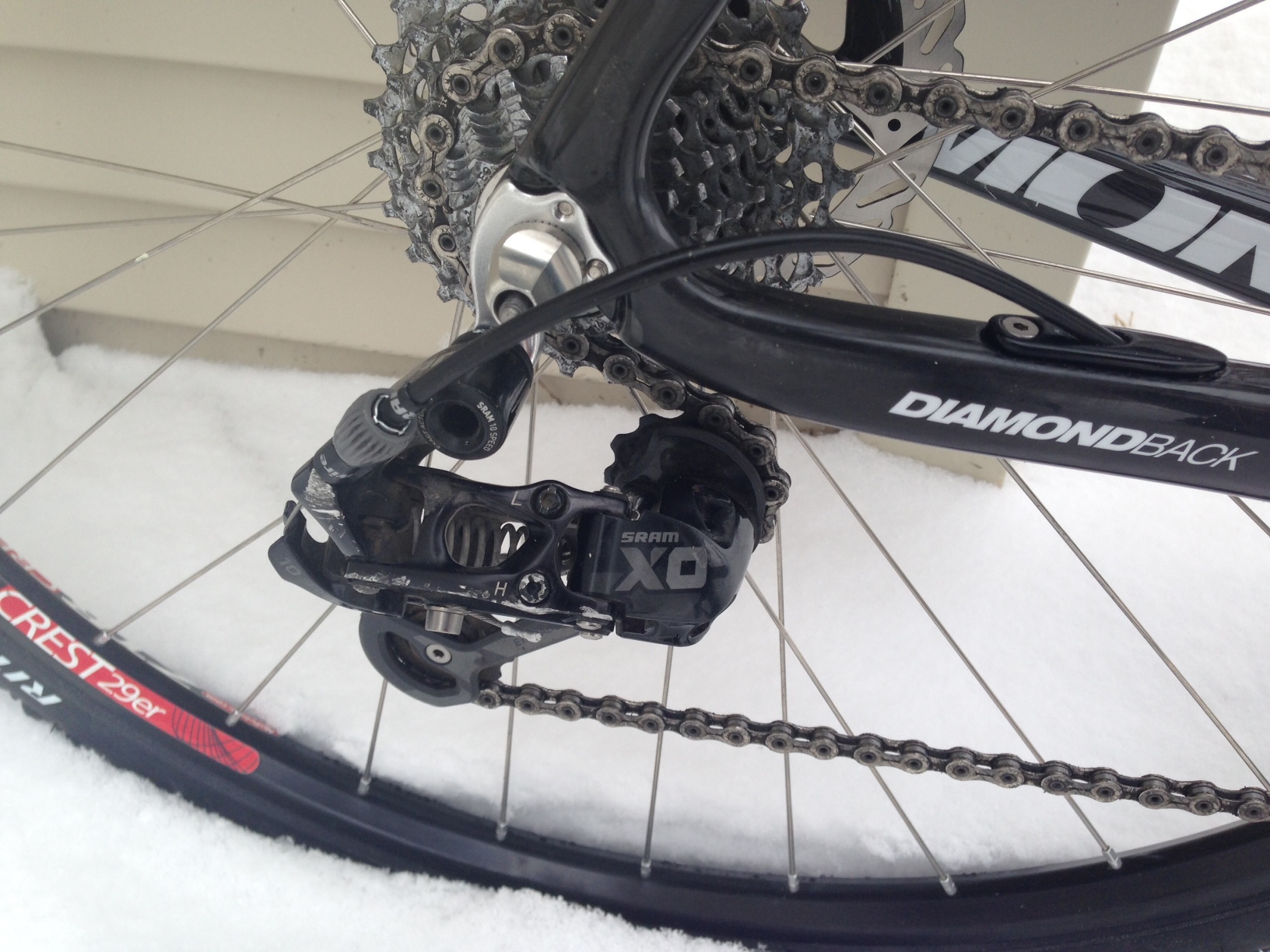 I’m really looking forward to riding this when the weather improves a little.  I might even throw on a down jacket and take it for a spin on the river path during lunch tomorrow.

For more details check out diamondback.com.