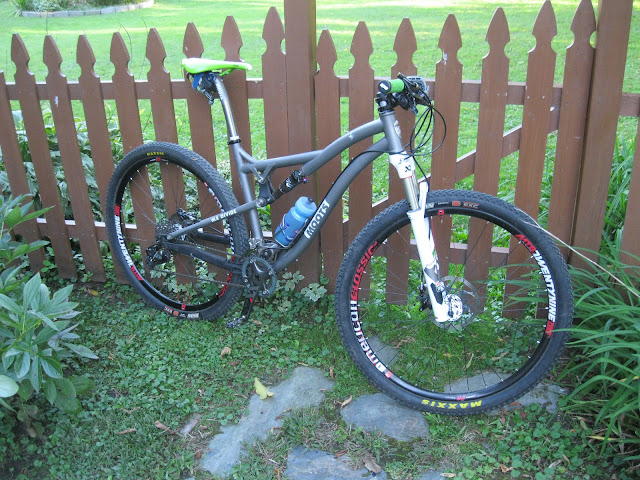 After a month’s worth of riding I’m ready to publish a review based on more than my initial “oh wow this is really cool look at my pictures” post a few weeks ago.  My schedule hasn’t allowed me to race on it yet, but I have put it through its paces on a variety of rides around the area.

The rear triangle is a solid, welded aluminum unit with slick machined dropouts.  The brake mount allows for replaceable threads- a nice touch for post mounted calipers.  The frame comes with a 142 x 12 DT Swiss axle but is convertible to a standard 135 x 9 qr with a dropout conversion kit.  My bike is built up with the standard qr configuration as that’s the way my wheels are currently setup- but I would consider running the 142 x 12 and switching dropouts is a 5 minute job.

Before riding the Divide my concern was that the bike would feel uncoordinated or unbalanced with the mixture of ti and aluminum halves.  The RSL is plenty stiff up front, but it doesn’t have any linkages, pivots or a shock to complicate it.  Ti full suspension bikes have been offered from boutique builders before, and they’ve often failed because the inherent characteristics that make it great for a hardtail (smooth, compliant ride) make it really bad for a full suspension bike (excessive flex).

For the suspension design Moots collaborated with the Sotto group, an independent consulting firm specializing in bicycle-specific suspension solutions.  The net result is a faux-bar single pivot design with a chainstay pivot similar to the Trek Superfly, Yeti 575 or Scott Spark.

First and foremost Moots is a high end fabricator of titanium bikes, and while they are remarkably good at designing and building ti frames it takes an entirely different skillset to design suspension.  Outsourcing that design work was a good move and something that wasn’t an option for small builders ten years ago.

The build comes in at a respectable 25.4 lbs. as shown.  Considering the kit is nearly identical to my RSL (with the exception of the Avid XO Trail brakes yielding a 30 gram per wheel weight penalty for their beefy 4 piston calipers) the extra three pounds is from the frame. 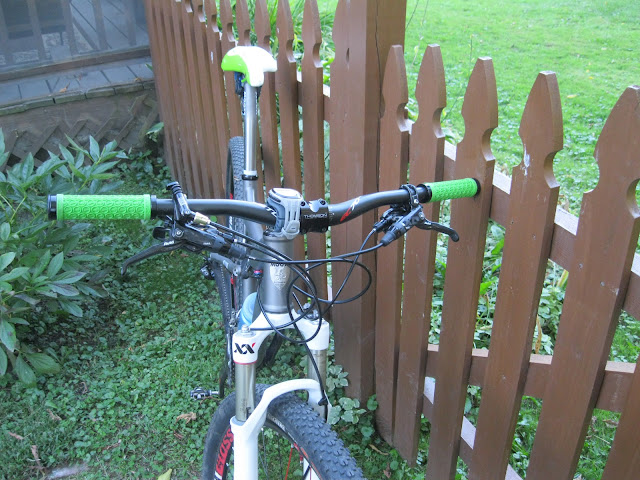 So how does it ride?  After a very quick attempt to get the suspension dialed I headed out on my normal midweek loop.  The first grass section is short downhill with some bumpy tufts of grass where I normally land after semi-launching off the lip.  I took my usual line and I touched down without any chatter or feedback.  I can’t exactly recall what I said aloud as that happened, but I vividly recall how smooth it felt- and that I was already completely sold on the bike 1/4 of a mile into my ride.

Out on the trail the Divide didn’t disappoint- stable and smooth I was able to pick (and maintain) my well-worn hardtail lines with more speed and comfort.  The bike tracked up, over and around everything I threw in its path; the feel was remarkably consistent end-to-end.  I’ve ridden other full suspension designs where the stiffness and ride feel was dominated by one end being too stiff or too soft- and neither was the case here.

I’d summarize the overall feel as smooth, predictable and confident.  The bike feels very composed and predictable at any speed.  It’s not a fun, flickable, playful, twitchy or overly plush bike, but rather it zips along with a smooth, even-handed feel.  In spite of its size it also never felt too long, rakish or like a tractor-trailer.

Weight balance is a big part of off-road handling and is tough to divine from a simple geometry chart.  Head angle, front/center distance, offset, chainstay length and bb drop all factor in, but it’s all academic until you get the bike out on the trail.  As I said before the RSL is my benchmark, and pretty much any full suspension design is going to mean a longer back end than short and tight 17.55″ chainstays on the RSL.  Turns out that’s a benefit as the cockpit lands a little more centered between the wheels and the bike goes where it’s pointed and arcs through turns very predictably.  One of the few negatives of the RSL (or any other XC racing 29er hardtail) is that the weight distribution is slightly rear-biased and keeping front end traction in the wet requires some attention.

While the bike didn’t change the way I ride it did allow me to maintain more speed on stutter bumps and provided me with quite a bit more confidence-inspiring traction in all conditions.  I’m still not taking the huck lines, but I am riding my XC lines smoother, faster and with more confidence.  Rough, chattery uphill sections were easily conquered with a snappy acceleration and some subtle steering input.

Setting up the Fox shock took a little fiddling, but I found my optimum setting with the air pressure at 90-95% of my bodyweight, rebound 2 clicks in from full open and the ProPedal setting on 2.  With the ProPedal wide open the bike felt very plush, but the falling rate suspension needs some mid-stroke damping to keep it from feeling too bouncy under pedaling forces.  Using the ProPedal settings allows you to use more sag as the shock stiffens up through the midstroke so you can run lower pressure so some air pressure readjusting is required as you work toward your optimal setting.  Most of the civilized world has figured out how to setup their RP23s, but for me it took a little dialing to really feel like I was getting the most out of the bike.

At the Ryan Hawks Memorial at Catamount there were a few chattery descents where this bike would have been a godsend- not only to save my back but also to eek out a little more speed and carry some momentum further into the climbs. 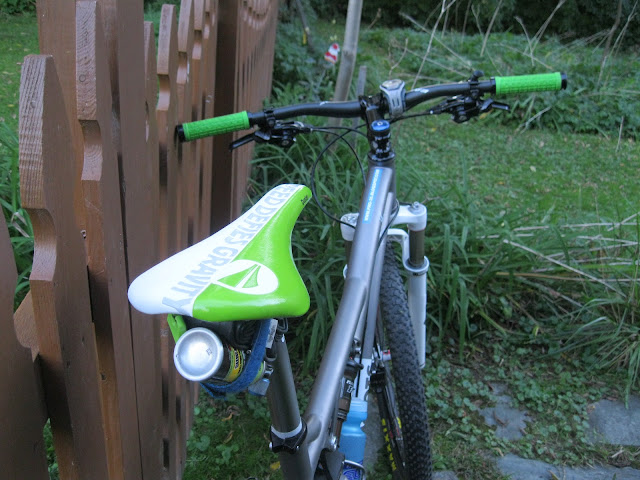 The extra 3 pounds (compared to the RSL) are noticeable when climbing…and that’s to be expected with any full suspension bike.  Under torque the properly setup suspension doesn’t move too much under pedaling forces and you still feel like your effort is being put into forward motion.  On some very smooth climbs I went into the 3 ProPedal setting, and in that configuration I could throw down all the square pedal strokes I wanted.  I don’t think it’s worth using that setting on the trail as it doesn’t really allow the suspension enough latitude to do its job, but on some exceptionally smooth sections I’d consider it.  As I said above the 2 setting is what I found to be the right mix of bump compliance, damping and pedaling efficiency.  I would consider running it on 1 for pedaling over very chattery, square-edged impacts like a Pennsylvania rock garden or for high speed, buffed out swoopy descents where you want to really compress into the corners.

In the rough is where the bike really shines, and the ti front end smooths out the high frequency chatter unlike any other full suspension bike I’ve ever ridden.  The multi-material approach is truly the perfect blend of the modern ti front end and a smooth, efficient, tried-and-true suspension design. 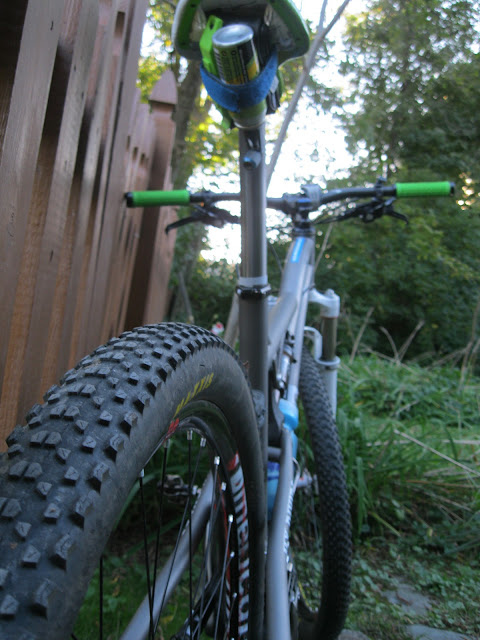 All in I’d say Divide is more like an M3 than a 911.  The ride feel is amazing and designed for racers in a package perfectly suited to all day epic rides and endurance races.  While it has legit trail chops and is a stable platform for pushing the limits of traction it’s really most comfortable with a number plate on the front.

You may find bikes that are lighter, stiffer, or cheaper, but none of them provide the total package and mind-blowing ride feel of the MX Divide.  Racers on a budget will look elsewhere, but for ride quality connoisseurs there’s no comparison.

As much as I’d love to own an M3 it’s not in the cards, but fortunately the Divide is already in my stable. 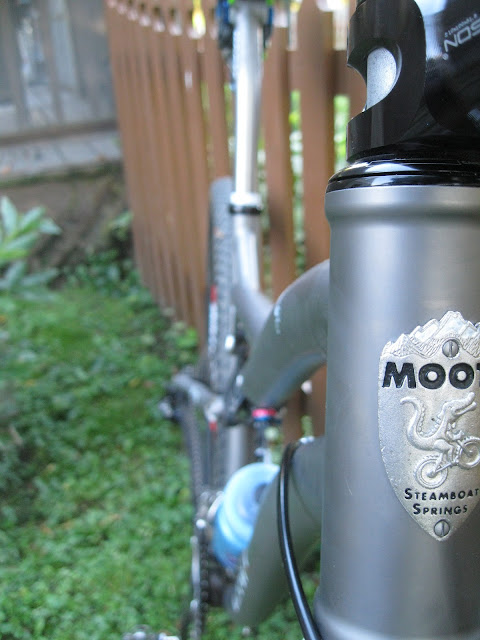