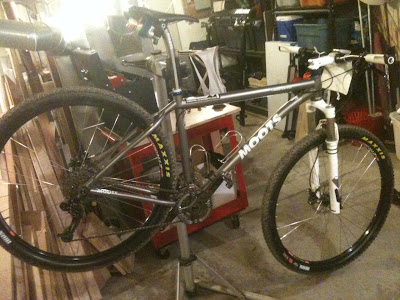 I’m glad my first race of the year is out of the way.

This week was the first Wednesday Worlds at Catamount, and my first race of the year.  Sure I’d been training pretty aggressively and had some new found trail skills to put to use, but a lot has happened since my last event on August 21, 2011.

I’ve deliberately avoided posts about training.  Some of that is probably because I can tell I’m improving but still don’t have a good handle on where I am relative to last year, and some of it is because I’m a little self-conscious about it all.  Somewhere between the whining about hard efforts and existential crises taken out of context is the day-to-day of riding and training.  Keeping track of my performance has always been a challenge for me and I don’t want to add pressure to myself or try to get too grandiose about how bad ass my training has been or how I’m going to take people apart on the race course.

Racing is hard, and although I remind myself of that regularly there’s still no way to fully prepare for that all-out effort unless you’re actually toeing the start line.  Physically and mentally there’s no replacement for racing.

Leading up to Wednesday’s race I was nervous.  I’ve been totally off the local cycling grid and have been riding almost exclusively by myself.  That suits my introverted style, and I push myself, but it makes it tough to benchmark relative to the competition.

So how’d the first Wednesday Worlds of 2012 go?  Overall pretty well, though I was ready to pull the plug halfway through the first lap.  This year’s hill course is similar to years past, but somehow it manages to incorporate all of the sharp climbs at the expense of the long diesel ones.  I like the long diesel ones.  They suit my riding style and I know I can dig a little deep and reel people in towards the top.  I don’t like the short, sharp ones.  It’s tough for me to produce such short, sharp repeated efforts and I have to factor them into my pacing strategy.

I didn’t do Flower Power, and I didn’t get a full warm up.  The start of the course was similar to what we’d done before, so I anticipated where the hard efforts would be based on that.  I was planning on a handful of short, sharp efforts and was metering my effort accordingly.  My start was good, probably a little too good.  I was heading up the second steep climb with the group I want to ride with but can’t quite yet.  I backed off a little and let a couple guys go who I knew I couldn’t chase.  After that I got a little too aggressive punching it going over the wall and started to feel the effects of the start right when I needed to be maintaining my pace.  Ouch.

I started to slip a little, but recovered slightly for what I thought was the last steep pitch.  Previous loops had the gravelly slog up to the rockwall as the top of the course- but not this year.  After bouncing over the rockwall it was all new singletrack trough the woods- and a shit ton more climbing.  Barely halfway through the hard part, I was hurting pretty bad and going backwards fast.

From there to the top of the seemingly endless climbs I was essentially soft pedaling as racer after racer slipped past.  At some point Nemesis caught me and we started riding together.  Before long we were in a small group and were trading places with each other for the next few laps.

By that time I was starting to settle in a little, and knowing how much climbing lay ahead I backed off a little on the early steep sections.  That didn’t really make it easier but it made the overall pace more sustainable.  Meanwhile my trail skills were totally gone.  I was riding like I’d just crashed (even though I hadn’t) and was just losing time on every stupid turn.  Dammit.

On Lap 3 things improved a little.  I’d sorted out how I needed to attack the climbs, knew how long they were and was able to get a little smoother on the turns.  Simon’s instructions about falling into my socks were starting to change my actions instead of just rattling around my head like some empty affirmation.  Looking back I think I’ve just done so many races there that my well-worn bad habits crept back when I was on the rivet.  I had to relax and back off a little so that I could let go of some tension and really feel the trail, and while I wasn’t really smooth I was certainly smoother.

Nemesis and I had traded places many times through laps 2 and 3 with some other riders in our group trading pulls periodically.  Somewhere on lap 4 I got a gap and stretched it to 30 seconds by the finish.  Beating him is not why I get out of bed in the morning, but it’s a very real performance benchmark.  Last year I had a couple of early season races where I was way ahead, and yet as I thought my fitness was improving he caught right up.

Really I have no idea how I’m doing compared to last year.  Wednesday’s race was a favorable indicator and I’m glad I finished when I really just wanted to quit.  I think my form is pretty good and if I can tweak my pre-race prep a little (by pre-riding the course and getting a decent warm up) with the right pacing I can improve on my performance. 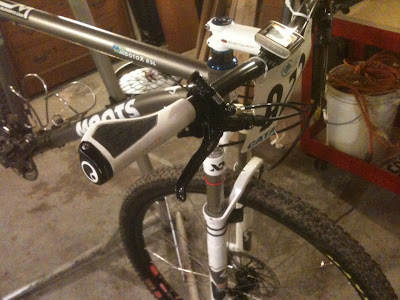