Highland Mountain Bike Park opened my eyes to the world of DH riding, air, and what was possible on a bike on my initial visit 4 years ago. After a few trips the old NE Style became a favorite. NE Style is Highland’s A line under the lift, with big drops, jumps, a few wooden features and it’s whole lot of fun. The newly revamped NE style was finished this past spring with the initial ‘out of the woods’ drop growing both in height and in depth, which had been on my mind since I fist looked at it last fall. With the season taking me all over the East Coast and beyond this year, the chance to ride at Highland did not present itself until this past weekend at the Overmountain Enduro. 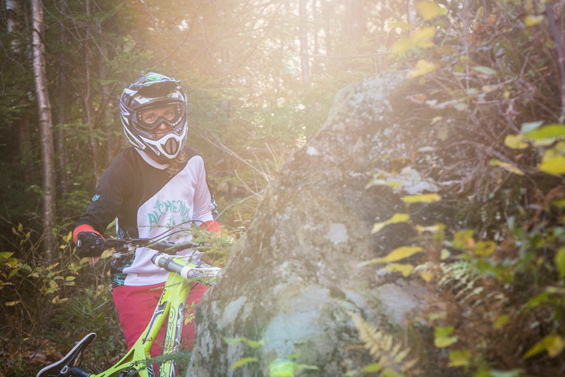 All smiles hiking for NE Style After the Enduro it was time to hit the trails with the Furax, the DH bike Xprezo Cycles gave me for the Mt. Sante Anne World Cup. Riding the DH bike was a blast. Although the Battle of Hellion is an awesome event, the enduro was a sweet note to end on. So, I approached MTBVT’s Ryan Thibault to see about getting a pic of the Out of the Woods drop the next morning, and he was game. Morning dawned bright, and everything felt right for sending the drop. Not only was Ryan ready with his camera and 2 intern videographers, MTBVT teammte Dylan Conte was ready to lead me into it (also sending it for the first time, on his all mountain bike…). First roll down the speed wasn’t there… Back up, this time ready to go faster. Rolled again and a videographer was standing on the end of the bridge, errr… hard braking again. The last time with Dylan in front of me was perfect. Mission accomplished and body tired, I called it a day, however, now the rest of NE style is on my mind…